Share All sharing options for: Rysheed Jordan blowing up 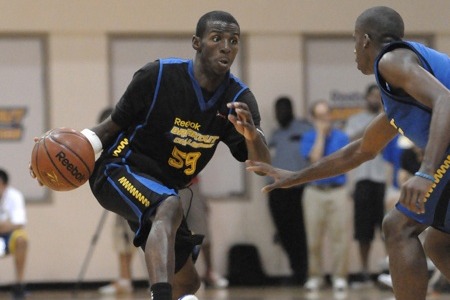 Philadelphia point guard, Rysheed Jordan has never really been "off-the-radar" in the Philadelphia area. The super-talented guard has been offered a scholarship by practically all of the City 6 schools (Penn being the exception), and over a dozen other high-major programs. Big time programs across the country are coming to see him play at AAU events as well, and while he hasn't been offered by schools like Kentucky just yet, they are showing some big time interest.

Last weekend, Kansas head coach Bill Self saw Jordan in person when he flew out to King of Prussia, PA for the Hoop Group JamFest that was taking place there, and he clearly liked what he saw. Self was checking in on a number of prospects at the JamFest, including Villanova target Tyler Roberson and others.

Following the event, Self's interest in the 6-4, 185 pound guard was formalized and Kansas is now among Jordan's list of offers. He recruitment remains wide-open at this point, but the five-star prospect has received heavy interest from Maryland and Temple so far, and both Under Armour schools figure to be high on his list. Villanova's Jay Wright is also working hard to move Villanova up the talented recruit's list, but interest from blue-blood schools like Kansas will cloud the picture early on.

He is a top-10 ranked point guard in the 2013 class who has great size at the position and excellent passing ability. With his size, he could potentially also play off the ball in college without giving up much defensively.

Goodman getting interest from Brown

According to Constitution head coach Rob Moore, new SMU head coach Larry Brown has called to express interest in former Villanova-commit, Savon Goodman. Brown is likely familiar with the talented small forward from his time spent with Jay Wright at Villanova games and practices since he was fired by the NBA's Charlotte Bobcats.

Moore insists that Goodman will be academically eligible to play in college in 2012, but admits there is a chance remaining that he will opt instead to spend a year a prep school and reclassify to the 2013 class.

Goodman will visit Seton Hall tomorrow and will be setting up visits to Pittsburgh and UNLV as well. Zagsblog.com reports that West Virginia, UCLA, USC, St. John’s, Gonzaga and Temple with a goal of deciding in time to enroll for summer classes in June.

At some point, Amile Jefferson will have to make a decision on where to attend college. That decision might come soon, but Jefferson insists that he is still trying to decide.

"It’s still up in the air," he told MainLineMediaNews.com. "I’ve learned a lot about the schools that I’m considering, have met with the coaches and players of each of the teams, and want to pick the school that fits me best. I definitely didn’t think it would take me this long [to decide], but it’s been a great process and I’m honored that these schools would stick with me so long. I’ll probably pick a date [to announce my decision] soon."

There would be room for the talented forward to play at any of the schools remaining on his list, which include NC State, Duke, Kentucky, Villanova and Ohio State. Recent NBA defections or transfers have opened up playing time at most of the contenders.

The two ACC schools seem to lead the pack if you ask people with knowledge of the situation, with Kentucky close behind. Villanova remains "in the mix," for Jefferson if he ultimately decides to stay at home for college, but that possibility does seem remote.