Recruiting with the Big Boys

Share All sharing options for: Recruiting with the Big Boys 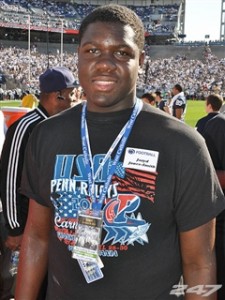 Jaryd "Hamburger" Jones-Smith clocks in at 6-7 and 290 pounds after his junior year of high school and he has emerged as one of best offensive line prospects in the Philadelphia area at West Catholic. It is no surprise that the 2013 lineman picked up a scholarship offer from Big East-bound Central Florida on Thursday, or that he has offers from Arizona, Pittsburgh, Virginia and Temple. What is surprising, is that on the same day that UCF got involved with Jones-Smith, so did Villanova.

Head coach Andy Talley had loudly complained in interviews that the Big East build-up had affected his recruiting, because they got involved with players that were likely to get FBS offers in anticipation of the move. The truth is, however, that Villanova has always been involved with recruiting players at that level.

The Wildcats don't take many transfers for football, so talent has to be developed or recruited to compete at the highest levels of FCS football — where most of their opponents will take on multiple transfer players from FBS programs every year. Instead, Villanova has to try and land players with that kind of talent on the first go-around.

Rising-sophomore, Jamal Abdur-Rahman had a BCS offer from Maryland coming out of La Salle High School in Philadelphia. Incoming freshman linebacker Corey Majors picked the Wildcats over offers from Pittsburgh and Temple. Both players had a chance to play for BCS conference schools, but opted for the small Catholic school on the Main Line.

Jones-Smith is a player that Villanova's football coaches will hope to woo in much the same way, citing their recent successes on the field and with recently taking offensive tackle Ben Ijalana from obscurity to the second round of the NFL draft. The Wildcats have a pitch for any player that they might go after.

Jones-Smith has visited Virginia and Penn State in the past year, but is still fielding offers. His dream school is apparently Alabama, with Penn State also being near the top of his list. PSU has shown interest (albeit, under the previous administration), but has not yet offered and Alabama has not been involved at all.

That isn't the only player Villanova got involved with on Thursday that has offers and interest from big-time FBS schools, either. Roman Catholic High School's Will Fuller, a 6-1, 170 pound wide receiver was also offered by a coach from Villanova to be a member of their 2013 class. He also holds offers from Delaware and Toledo as well as Big East football schools, Rutgers and Temple.

Fuller is quickly rising up in recruiting circles, after recording 47 catch and 700 yards as a junior and running a 4.5 in the 40-yard dash at a recruiting combine. He also broke the Philadelphia high school record for single-game receiving with 10 catches for 276 yards and 2 touchdowns in a September game (a record that had stood since 1969). In addition to his offers, he has had interest from Penn State, Virginia, Michigan State, and UConn, and about 14 schools in all.

Villanova has to work harder to convince players like Fuller and Jones-Smith that the Main Line is the right place for them, but the Wildcats will always make an effort to get a foot in the door with these kids. Delaware does as well, but only in hopes that they will keep UDel in mind when they ultimately transfer down to FCS — Nova's motives are different.

These kids might end up on the Main Line as transfers, but chances are that they won't. When Villanova goes up against FBS heavyweights for a football prospect, they do so with the intention of landing the kid out of high school.

Does the fact that Nova is going after these super-talented prospects say anything about where Villanova football is heading? More likely, it speaks volumes about where the program has been.

Despite Talley's indications otherwise, Villanova has always offered hot prospects, and especially local kids who know the Villanova brand. Oversigning, injuries and other factors can always land a oversized-talent for the FCS program. Sometimes though, the Wildcats don't even need outside factors.

Abdur-Rahman committed to Villanova early, before his senior season was even played — despite his Maryland offer, the star running back just liked Nova better. The same was true for Corey Majors, who was so set on heading to Villanova that he stuck with his commitment after being told he would have to delay enrollment by a year and head to prep school.

So, the Wildcats will continue to recruit against the big boys, because nobody lands all of their recruits, but you can't reel a kid in if you never try.

Notes from the recruiting trail: