The Next Big East Commish

Share All sharing options for: The Next Big East Commish 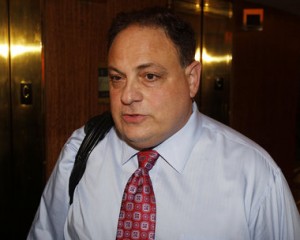 The real impact of a conference commissioner in NCAA Division I sports is subject to debate. So many major decisions are driven by the university presidents rather than the conference's chief executive, but the buck must stop somewhere, and that tends to be the commissioner's desk. The Big East lost schools during realignment that it might have lost anyway, and stability in the conference remains in question, so the Presidents' made a change. Who they choose to be the next leader could have an impact on whether or not the league can weather this storm.

According to interim commissioner Joe Bailey, the Big East hopes to hire a new permanent commissioner within the next 3-4 months. The new commissioner would step into a conference that will be geared up to work out a new television deal and will be charged with building a stronger and more stable organization than the Big East has been since the early 2000's.

Only one thing about that commissioner search is known — it won't be Joe Bailey taking the job.

"[T]he answer [on whether he wants the job] is a no with an exclamation point," Bailey told reporters on Wednesday afternoon. "I wouldn't be interested in either the content of the work or the people that you would be working with or either personal or professional growth, because I think all of those are going to be here for this particular person.

The interim commissioner won't have a role in television negotiations, instead the conference will hire media consultants to assist with those discussions and report directly to the university presidents. It is still believed that the conference will seek a new commissioner with some media connections and experience to help relations with television partners either this fall or in the longer term.

The conference is also going to look for a commissioner that has some football experience (on the business and administration side, preferably). It isn't a necessary factor in this case (or any case) and it isn't the most important factor, but the next commissioner has to understand and pay due respect to the primacy of football among college sports.

College basketball is wildly popular in the month of March, largely due to widespread gambling through office bracket pools and the like. Overall, however, the television ratings for most regular-season games are dwarfed by college football and beyond a few major games, basketball is mostly relegated to "filler" content status by the television networks that buy it — ratings are good enough to air it, but the dollar-value doesn't approach other properties.

That is why when the Big East negotiates a new television deal this fall, the majority of the money will be allocated to the football schools. Basketball will get plenty of money as well, but it is football that makes the Big East likely to get paid at a similar level to other major conferences (though, probably a 6th-place finish among FBS conferences).

That is as much about perception and trust as it is about any tangible qualities. If a candidate can't work to unify the conference through a favorable perception and the trust of all members, the leadership needed to succeed will not be there.

The commissioner can't make conference decisions, but he or she can steer the presidents in one direction or another, but only if everyone trusts that the commissioner is supporting their best interests.

John Marinatto was a lightning rod for criticism in the media, by fans and possibly (probably) by conference leaders themselves. The next commissioner can't become a personification of the conference's internal disagreements, but instead will be required to rise above those disagreements and be a moderator and diplomat.

A candidate like Rutgers' athletic director Tim Pernetti already has too much negative baggage in that regard to accomplish the task. He has already butted heads with other athletic directors and conference officials on a number of issues and his strong association with Rutgers University doesn't create an impression of impartiality.

The other inside-candidates may have similar problems, though none are so strongly associated with a current member-school. Big East senior associate commissioner Nick Carparelli and associate commissioner Tom Odjakjian are also candidates that are known quantities to the conference and members of the league are likely familiar with (and have formed opinions on) them — meaning that they may also suffer from the same issues.

The Big East realistically needs to look outside the conference for its next commissioner, to bring in a candidate who can relate to all of the 18 full members as well as three football-only members.

For Villanova, the new commissioner could have a profound effect on the university's future relationship with the conference. Will the new leader help or hinder the Wildcats' football program going forward as the school seeks to invest in and position itself to move up the food chain. Ultimately, a move to the Big East conference for that program would be determined by the conference presidents, but the commissioner can help to build a dialogue on the matter — or to ignore the issue entirely.

Really, its about the money

A lucrative new television contract will go a long way to smooth over any internal conference tensions. The value of the Big East's television rights is yet to be determined but it is likely to be significantly bigger than the deal the conference currently operates under. Why? Television has more hours to fill and with low production costs and high interest levels, the value of sports content has never been higher.

FCS conferences like the CAA and Ivy League now have limited national television deals, and the major conferences are getting better deals for huge money and exposure. The Big 12, which was on the verge of it's own demise a little under a year ago, agreed this week to a deal that will pay member schools $20 million per year though 2025. The ACC, which is the Big East's closest competitor, signed off on an extension with ESPN that will pay out $17 million per year to each of it's 14 members through 2027.

That could be good news for the Big East, who will be next up for a new deal in a market where valuations are increasing dramatically.

The flipside to the argument is that ESPN, the largest and most successful of the networks bidding is in less need for the content. The ACC deal includes 30 more basketball and 14 more football games on the network than the conference previously had.

ESPN will likely still bid on the Big East rights though, if only to try and keep their competition from landing the rights. The new NBC Sports and CBS Sports cable networks are hardly threatening the ESPN empire by broadcasting FCS football and mid-major basketball. If either of those networks or the planned Fox network were to land a major conference, it could change their fortunes.

The only major conference that the new NBC and CBS (and maybe Fox) networks still have a chance of purchasing television rights for is the Big East. The other major conferences are locked into current television partners for more than a decade, leaving the reconstructed Big East as the biggest fish left in the sea for a long time.

The conference will hope to try and come close to the ACC's current per-school revenue distribution. The more money a conference can offer its members through guaranteed revenue streams, the more stable it will be.

Negotiating a bigger number will be relatively easy compared to the debate over how to allocate the television funds. The conference will have 13 football-playing members in 2015 and 18 basketball-playing members starting in 2013. The current pay-out to basketball members is significant (thanks largely to a national broadcast deal with CBS), and the conference earns more money from NCAA tournament shares than from the BCS system at the moment.

The largest driver of growth in television value is football, however, but the basketball schools will expect to at least somewhat share in the new wealth. Without negotiating separate contracts for football and basketball, how do you put a value on the individual sports?

If the Big East is operating with optimal harmony, the Presidents will rely on an impartial consultant to value each side of the conference relative to the deal they agree to. If they are not, the conference will have a period of strife an potential fighting, leading to more of the same drama that the league has experienced in the last year or two.

Louisville is now being "transparent" about their desire to join the Big 12 or ACC in conference meetings, according to Andy Katz of ESPN. That may be wishful thinking on the part of the Cardinals' administration, but it is demonstrative of a pervasive instability that can only be cured by a lucrative television contract and some renewed trust and strong leadership.

The ACC, for their part, probably wouldn't be interested in Louisville or anyone as an expansion candidate. The ACC is not likely to expand to 16 members unless Notre Dame is one of the schools joining. That could change if the conference were to lose some teams to another conference, but there aren't many threats out there.

That means that the Big 12 will determine whether the major conferences continue to play musical chairs. The Big 12 will need to decide whether to expand to 11 or 12 members, or to stand pat at 10. Their new TV deal includes a grant of TV rights that will make it difficult for members to exit the conference before the deal ends, meaning that they are stable now. It may be impossible to find schools that would add enough value to the conference to increase the value of their TV deal beyond $20million per school annually, however.

If the Big 12 does expand again, Louisville would probably be among their candidates. They would likely also be interested in adding Notre Dame.

In the meantime, no Big East members have invitations from other conferences on the table, and nobody will be leaving the conference until that changes.