Nova back in the picture for Williams

Share All sharing options for: Nova back in the picture for Williams 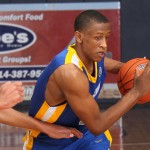 Troy Williams cut Villanova from his list. Then he cut Georgetown. Now, both schools could be coming back into the picture for the super-talented 2013 wing. He told the National Recruiting Spotlight website that he was going to add at least two schools to his list of Kentucky and North Carolina; and he's considering bringing Georgetown and Villanova back into the race, with Florida and Louisville also under consideration.

Williams was about to commit to one of UNC or Kentucky last week, but got cold feet at the last minute.

"That morning, I talked to my uncle [Boo Williams] about it and we decided to hold off," Williams told the site. "I didn’t really feel like it was too early but we both didn’t feel too comfortable with it."

Williams hasn't made his mind up about which schools he is letting back into the picture, but the bad news for Villanova is that he said it will "probably be Georgetown and Florida."

The biggest factor going forward for Williams will be his relationship with the program's head coach. Assistant coaches do a lot of the recruiting legwork, but it is often the head coach's job to close the deal. If Jay Wright wants to have a chance with the five-star blue-chip prospect, he will need to get in touch and stay in touch with him.

He has no set date to make a final decision on where he will go to college, but he won't be choosing until after the AAU season is over.