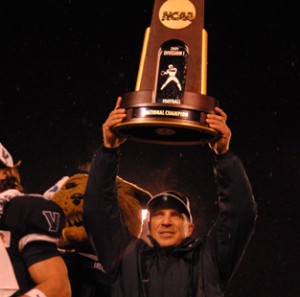 In 2010, the FCS playoffs expanded from 16 teams to 20, and it was just in time to help Villanova's team make the field, despite losing star player Matt Szczur for most of the regular season. Szczur eventually returned to help the 'Cats steal an overtime victory at Delaware to seal their invite to the tournament. That season ended with a loss in the semi-final to eventual champion, Eastern Washington, in a game that Villanova could have won if they had protected the ball as they had in most other games that season.

Just two years later, the NCAA is now close to opening the field up even more, expanding to 24 teams.That is 20 more teams than the Bowl Subdivision's proposed playoff.

For Villanova, playing at the highest levels of FCS football means that the field's expansion should only make it easier for Andy Talley's program to earn a bid. The CAA was a major beneficiary of the last expansion effort and this

The top eight teams would be seeded under the proposal and would get a first-round bye. That is up from just five seeded teams currently. The Pioneer League, a low-expense and large footprint conference, would be granted an automatic bid to the tournament for the first time in their history, the other three new places would be at-large bids available to schools from any conference.

The Ivy League and SWAC do not participate in the FCS postseason. That means that although there are 124 schools playing football at the FCS level, only 103 of them would potentially be eligible for a playoff bid. Just under a quarter of the subdivision would participate in the playoffs. By comparison, 19.8% of college basketball programs earn a bid to the NCAA Division I basketball tournament.