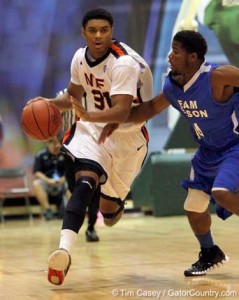 "I was really hoping for Allerik Freeman to be here, but I don’t think he’s here," Ryan Arcidiacono told SlamOnline.com at the Mary Kline Classic. "That’s who coach told me to recruit because he came on an official visit with me, so I was hoping to talk to him."

It's no secret that players recruit each other. Coaches have limited contact with the prospective student-athletes under NCAA rules, but their contact with each other isn't controlled at all. It isn't often talked about, but Jay Wright asking his incoming point guard to try and land a shooting guard in the class afterward isn't unique to Villanova.

Arcidiacono ran into elite players and Villanova targets at AAU events, high school games and at showcases like the Mary Kline Classic. Why not take advantage of that?

"I’m definitely going to talk to some of these younger kids just to get Nova in their head and to get them thinking about it," he said about underclassmen at the Mary Kline Classic. Wayne Selden, Jermaine Lawrence and Karl Towns were among the blue-chip prospects that were at the recent event for Arcidiacono to talk to.

He will also get a shot at the Harrison twins, Julius Randle ('13), Jarnell Stokes ('15), and Troy Williams ('13) when he attends the USA Basketball under-18 National Team camp from June 5-12 this summer. Jay Wright would love to bring some of those talented young players on board, and you can almost be assured that the Wildcats coach would love to have Arcidiacono talk up his program while he's out in Colorado Springs.

It also wouldn't hurt if Arcidiacono were on the lookout for some talented 'Nova targets on the practice court. If he can make a talented wing like Williams want to play with him, it makes it a lot more difficult for that player to choose another school.

Maalik Wayns also did some recruiting for Villanova, and was reportedly influential in convincing Dominic Cheek to come to the Main Line. The two guards became very close and Wayns' influence played a role in Cheek's decision.

Can Arcidiacono become one of Wright's best recruiters?