Robinson to commit by Friday

Share All sharing options for: Robinson to commit by Friday 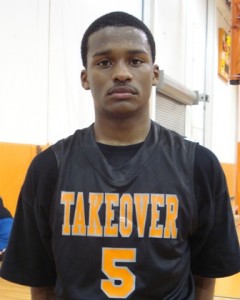 Villanova offered Stanford Robinson in December 2011 and the Wildcats have made an impression. The talented 2013 shooting guard out of Paul VI high school in Fairfax, Virginia has recently been on a tour of colleges that he has been considering — including a stop at Villanova not long ago.

After a Monday stop in Bloomington, Indiana to visit the Hoosiers, Robinson told InsideTheHall.com that he plans to sit down with his family and coaches this week and hopefully make a decision by Friday. The decision is coming relatively early for the 46th-ranked player in his class.

"Indiana’s definitely high in my decision, but so is Villanova and some other schools," Robinson said to the Indiana blog.

Robinson also has offers from Marquette, Miami, NC State, Seton Hall, USF, Virginia and Wake Forest, but it seems like Villanova and IU are among his favorites.

He also had some great things to say about Indiana in his interview with InsideTheHall.com. He praised the Hoosiers' coach Tom Crean and noted his existing relationship with new IU assistant coach Kenny Johnson, who had recruited him to play at Paul VI in his previous position.

According to 2013 Center BeeJay Anya's (an AAU teammate) twitter account, Robinson reported that he had a very good time at IU, and it sounds like he was impressed.

Robinson is a left-handed shooter with good range and adequate size to play the 2-guard in college at 6-4 and 175 pounds. He acts as more of a combo guard at the high school and AAU level, but would need to improve his point guard skills more to be considered an option at the 1 in college. His length will be an asset defensively.

Update 10pm: Robinson has picked Indiana, per an announcement on Twitter.