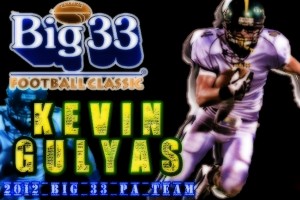 Villanova football has had its share of Big 33 Game alumni in recent years. Kevin Gulyas will be a rare one to attend the school as a walk-on, however. He was one of the best wide receivers in Pennsylvania High School history if you trust the statistics. The career leader for receiving yards (4,201) and receptions (247) as well as holding the single-season records in both categories (2,031 and 122, respectively), set in the fall.

"I was very excited to learn I’d not only be representing Allentown Central Catholic, but the entire Lehigh Valley in the 2012 Big 33 game", Gulyas told Big33.org. "A lot of great players have played in this game and to be added to that list is a huge honor. I’m excited to compete with the best of the best and also spend a week with my host family and buddy."

Coaches from bigger schools were talking to Gulyas, which may have caused him to delay his college decision. Penn State and Boston College both checked in on him, but passed because he wasn't the ideal height for his position (he is taller than Wes Welker, for the record). Villanova wasn't able to give him a scholarship when he was ready to decide, but he chose to be a Wildcat over taking a scholarship elsewhere.

"I chose Villanova because of the academics and people", he said. "The coaches and players all made me feel welcome on my visit and it just felt like the right place."

"He's arguably the most productive wide receiver in the history of Pennsylvania high school football," new Villanova secondary coach Tony Trisciani told the Morning Call. Trisciani coached against Gulyas for the last few seasons, while he was the head coach at Lehigh Valley-area Whitehall High School. "We're very fortunate to have him as a Wildcat, and in our offense he is going to be a great fit as a slot receiver."

Another incoming freshman, Corey Majors, participated in the game last summer before spending the 2011 season at prep school.

The Big 33 Football Classic is an annual All Star game, pitting the best high school football graduating players from Pennsylvania against their counterparts from Ohio. It has been a tradition since 1957, and the game’s alumni have gone on to illustrious college and professional careers. There has never been a Super Bowl that didn’t have at least one Big 33 alumnus on the field.

Ohio has won the last three games in the series, and 12 out of 24 appearances in the game which had previously matched Pennsylvania’s best with Texas and Maryland as well.