Texas AD: "We've talked to Notre Dame about the Big 12"

Share All sharing options for: Texas AD: "We've talked to Notre Dame about the Big 12" 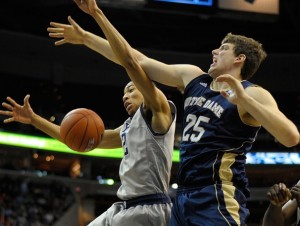 It isn't shocking, but Notre Dame football is one of the most valuable free-agents in the college football landscape and practically every conference would be willing to make room for their programs if football were coming along for the ride. It was less a bombshell than a known truth when DeLoss Dodds, the University of Texas athletic director, told CBS Sports that they had contacted the Irish about relocating their athletics program.

"Notre Dame has options," Dodds told Brett McMurphy. "I think they love their position. I certainly think they can continue to do what they're doing and do it well and be a major player. But they have options.

"We've talked to Notre Dame about the Big 12 ... They could put some football here [by playing a few non-conference games against Big 12 opponents].

Notre Dame doesn't appear to be ready to make a move just yet. For much of the last year it was believed that the Irish preferred to lean east — with the ACC having the best chance of landing the valuable Notre Dame brand if they were to change their mind on staying independent. Now with FSU's very public displeasure with the ACC's television contract and their place in the conference power structure and rumors that four schools have reached out to the Big 12, the ACC seems less stable than ever before; and no longer in prime position to grab the Irish interest.

That is where the Big 12 may have an opening. Potentially offering members a payout of $20-$30 million per year, the Texas-dominated conference would be an attractive platform for the Notre Dame football program — IF they were to join a conference.

That is a big if, however, as the Irish are still publicly very committed to the Big East conference and football independence.

"I know right now we're focused 100 percent on [rebuilding the Big East] but there's no question contingency plans [about joining another conference] on those pay grades higher than me have been discussed and will be discussed," ND basketball coach Mike Brey told CBSSports.com on Monday. "[I]f it doesn't work out [in the Big East], everybody's got a spot for us [in another league]."

Outside of Notre Dame, however, it appears that the Big 12 is going to have a fight over whether to add any additional schools to the league. Texas has a lot of say in conference proceedings and the Longhorns aren't convinced that a conference championship game is beneficial.

"I don't think it needs to expand," Dodds told CBSSports.com. "We could expand but the question is 'do we need to expand?' In my mind 10 is perfect because you play everybody in football and there is a double-round-robin in basketball.

"When we get into whatever system we get in for a championship, I think those coaches that play in a conference championship are going to say 'What in the world are we doing?'"

If those championship games are truly as lucrative as people think, though, the answer to Dodd's question may be, "laughing all the way to the bank." For schools like Texas and Oklahoma, in no danger of running an athletics deficit, perhaps the few million dollars that a championship game might represent isn't worth the additional step between themselves and on-the-field glory.

Either way, even if expansion occurs in the Big 12, there is less and less talk of Louisville and other Big East schools among the candidates.