Are Cunningham and Foye Elite Shooters?

Share All sharing options for: Are Cunningham and Foye Elite Shooters? 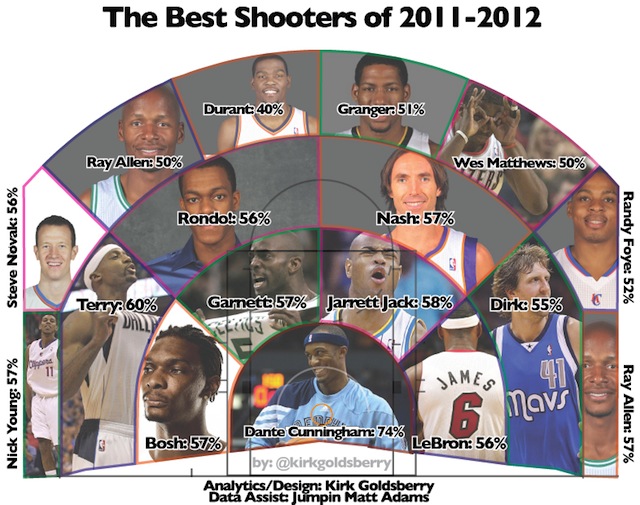 Kevin Goldsberry doesn't like Field Goal Percentage as a basketball statistic. It measures the number of made shots against those attempted, but doesn't really tell you how good a player is at shooting. Like batting-average in baseball, it has been often criticized by stat-heads as irrelevant to a player or team's true success.

Would anyone really argue that NBA FG% leader Tyson Chandler is a better shooter than Ray Allen? Chandler made 68% of his attempts this season, but when you look closer, 96% of those attempts were from within seven feet of the rim — and he was terrible shooting from beyond that range.

Space, Goldsberry argues, is a factor too important to ignore. Rather than dividing the court into 2-point and 3-point zones to determine a shooter's true ability, however, he divided the court into 17 zones, and then let us know which NBA player was the most effective shooter from each zone.

Dante Cunningham and Randy Foye each owned one zone in the study.

Cunningham edged out the league leader in FG% in the close-range zone, making 74% of his shots around the rim, while Chandler completed just 71% of his attempts. He also edged out LeBron James in that zone, with the King making 72% of his close-range shots. The Villanova alum obviously takes a good number of shots from a greater distance, and that fact possibly helps to open things up for him inside.

His prowess inside "legitimately puts him in an elite group of scorers," according to Goldsberry. Despite his high-efficiency, however, Cunningham still has the "role player" reputation.

Foye, meanwhile, owns one of the eight three-point zones (Ray Allen owns two of them, if you were wondering). In particular, Foye has been his best shooting from the high zone on the left wing. That may not be a surprise to anyone who was paying attention when Foye broke a Clippers franchise record this season with eight made three-pointers in a game against the Mavericks. That game had an effect on this statistic, since he made all eight from around that zone.

Ultimately, Goldsberry's zones won't have a huge effect on the game, just in the way that some people think about it. Massive free agent dollars won't be handed out for owning a zone, nor will spots in the All Star Game.

Cunningham won't stop shooting his midrange jumper and he shouldn't. Foye won't take all of his shots from that zone on the wing. Both have been tremendously efficient shooters in specific spaces, however, and that is certainly commendable. That said, both should continue to play outside their comfort zones, since the league will certainly always value versatile players over specialists.