JVP Can Be The Cats' Star

Share All sharing options for: JVP Can Be The Cats' Star 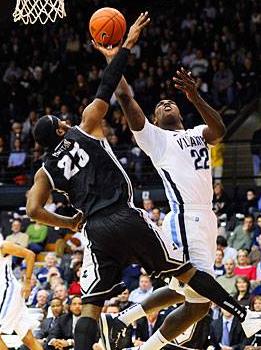 Can JayVaughn Pinkston continue to grow into one of the Wildcats' best offensive forces in 2012-13? It took him a little while to get his motor started in his rookie campaign, but once he did, he impressed in Big East play.

The expectations will be high for the former boxer, and Adam Zagoria is among the writers who are hanging their hat on JVP's coming season:

JayVaughn Pinkston, F, Villanova — After sitting out a season and then battling injuries last year, Pinkston could be a force in the Big East if he gets healthy and motivated. He averaged 9.6 points and 5.2 rebounds but had three games of 20+ points.

As one of Zagoria's top 15 Big East players, Villanova's forward will be expected to shoulder the load for the Wildcats and lead the team. It would be a new role for the big man, who had Maalik Wayns to take most of the pressure off of him as a redshirt freshman. Now, he will have to do it on his own as the primary target of defensive pressure.

He had a taste of that role during the few games that Wayns missed last year. If teammates don't take some attention away from him, it will be easier for defenders to double him up or block him from getting into the paint, where he has been the most productive.

If no other Wildcats emerge in 2012-13 as legitimate go-to options, JVP will have to make some outside jumpers. He connected on 36.6% from outside last season, which was among the team's best. His confidence in that jumper seemed to grow as the season progressed, however, and that trend may need to continue.

Regardless of where he ranks in the Big East, JVP is the Wildcats' player-to-watch.