Could Kennedy go to Temple?

Share All sharing options for: Could Kennedy go to Temple? 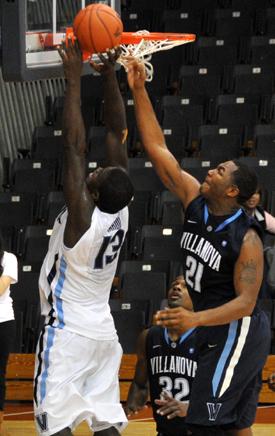 When Dylan Ennis opted to transfer from Rice University, Memphis was among that schools that had inquired about the talented point guard. The Tigers were immediately told that as a current Conference USA member, that Ennis wouldn't be released to transfer to their program — despite the fact that by the time Ennis was allowed to suit up at his new school, Memphis would be in the Big East.

According to Jon Rothstein, Temple will also try to recruit an in-conference transfer in Villanova's Markus Kennedy. La Salle and Kansas have also reportedly inquired about the big man.

Conference USA leaves in-conference transfer approval up to the schools to release a player or not, but the Big East has a policy banning such transfers. Under the Big East policy, a student athlete in men's or women's basketball or football is banned from transferring to another conference institution and participating in that sport. How would that policy handle Temple, however? The Owls will officially become a member of the Big East conference at the end of the month and will participate in the 2012 football season, with basketball joining the league a year later.

If Kennedy were to transfer to Temple, he would not play another college game until after Temple joined the Big East. So, would that move be an in-conference transfer or not?

That depends highly on whether or not Temple is a "Big East institution" under the Big East bylaws for basketball before the 2013-14 season. Since they are joining the conference as a full member, it is very possible that they would come under that classification.

What the Ennis story tells us is that whether a coach inquires about a transferring player or not, is not entirely relevant to whether that school is actually able to recruit him. Ennis was not released to talk to Josh Pastner or his assistants about a transfer to the future Big East school, and it isn't yet clear if Big East rules would permit Kennedy to play for Fran Dunphy at Temple.

Then there is the matter of what Villanova's transfer release for Kennedy entails. Schools can grant a limited or unlimited release to a transferring player. The best example of a limited release is the Jared Uthoff situation at Wisconsin, whose release restricted him from going to over two-dozen schools, including every Big Ten school, every ACC school, Iowa State and Marquette. Unreasonable transfer restrictions can be appealed to the NCAA, but are usually upheld when the restricted school is on the original school's future schedules, in their conference, or when the coaching staff suspects tampering.

Will Jay Wright grant an unrestricted transfer to his departing big man to go to another Big 5 institution or another Big East school?

Temple is interested in Markus Kennedy, but that interest may be wasted energy if Big East rules or Villanova's release do not allow that transfer to occur.