How good is it to coach at Nova?

Share All sharing options for: How good is it to coach at Nova? 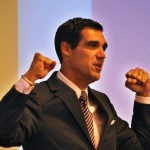 Syracuse has the best coaching job in the Big East, according to ESPN, though that job hasn't been vacant since 1969. Connecticut, similarly, has had nearly all of it's hardwood success in the 26 years since Jim Calhoun took over the program. Those coaching personalities have built their programs up into elites in the world of NCAA basketball, and ESPN's panel has placed both in the top-3 among current Big East schools.

Villanova's rank? Sixth, behind those two, Louisville, Georgetown and Pittsburgh.

Driven by Jay Wright's successes in the past decade, a strong local recruiting market and some excellent practice facilities, the ESPN.com poll picked Nova at the top of the middle-third of the 2012-13 edition of the conference coaching jobs. The idea was to list the schools in the order that a coach (or his agent) would select them, assuming all of the jobs were vacant.

Next season, Syracuse and Pittsburgh will depart the conference, but don't hold your breath for Villanova moving into the top-four at that time. New addition Memphis ranks at the top of Conference USA while Temple comes in a close-second in the Atlantic-10, converted into Big East programs, either could challenge for a top-spot in terms of facilities, expenditures and recruiting. UCF was considered the second-best Conference USA job, and none of the other basketball additions were at the bottom of their conference either.

A sixth-place finish, even in the Big East, is good but hardly elite. UConn and Syracuse may well struggle to replace the Hall of Fame coaches they currently have. Blue blood programs have recently been turned down by hot-names at mid-major schools. According to one source, Jay Wright turned down Illinois' interest this year, and so did Chicago Bulls assistant Ed Pinckney. Only the absolute best jobs in the country are likely to be able to select a coach of their choice — even then, it may be their second or third choice

How valuable is it to be the Head Basketball coach at Villanova University? It is an unlikely position to be left vacant, but do the Wildcats have the juice to pull a coach out of a very comfortable seat elsewhere?

That's the question that fans should be asking when agitating for a coaching change: Can they do better than what they have?

Villanova isn't an easy job. Expectations are high for the program and while the recruiting grounds are ripe locally, the best players still tend to gravitate toward bigger programs. Nova missed out on Gerald Henderson to Duke, Wayne Ellington to UNC and countless others over the years.

Vilanova has tended to hire good coaches who have made the most of the school's situation, but the coaching landscape has also changed over the years, just as the landscape of college sports itself grows and changes.

One thing is for sure: Regardless of how outsiders view the Villanova coaching job, Jay Wright seems to be very happy with it.