Villanova in the mix for Kennedy

Share All sharing options for: Villanova in the mix for Kennedy

Since announcing his intention to transfer last week, Markus Kennedy has received interest from La Salle, Temple, Kansas, UMass and Arizona, according to Jon Rothstein. He has added another school to his list though, and it is a familiar name for VUhoops readers — according to Ben Weixlmann of Scout.com, Kennedy is considering staying at Villanova. 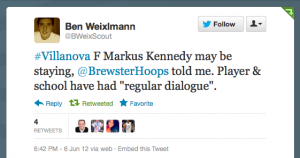 The report stems from his prep school coaches at Brewster Academy, apparently, who spoke to Weixlmann on Wednesday, informing him that he has had regular contact with Villanova's coaching staff since discussing his interest in transferring.

Players often think about transferring without really pulling the trigger. It is just usually handled without any announcements. Kennedy must have seemed rather sure of his intentions to the university, at least at the point that they sent out the release on his transfer intentions.

If Kennedy stays at Villanova, the Wildcats will have a deep and talented frontcourt in place for the next few years. His work to drop weight will allow him to play a more versatile role, and his passing skills from the post (as well as Ochefu's), would go a long way to complement the Wildcats' guard-oriented style of play.

Kennedy's sophomore campaign might not see as many minutes with Yarou and Sutton available to play in the post as well as newcomer Daniel Ochefu, but as a junior and senior, Kennedy would presumably be in an excellent position to earn a starting role. If he transfers, he will sit out next season, but would have three seasons remaining, but would be an Antonio-Pena-like 24 years old when he finally exhausts his eligibility.

Additionally, at schools like Kansas or Arizona he would potentially have to compete with similar blue-chip recruits for playing time.