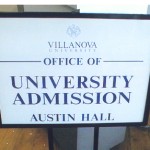 The Wildcats were slated to bring in a star point guard this summer, but an admissions committee didn't think his 4.0 grade point average was good enough. Before VUhoops readers begin to hyperventilate over the status of Ryan Arcidiacono, it wasn't him, and it wasn't the Villanova Wildcats who rejected a player — it was Northwestern University who rejected 3-star guard, Mislav Brzoja, over concerns that his grades at a foreign school prior to coming to the U.S. weren't strong enough.

That's just life in Evanston, it seems, where athletic pressures seemingly cannot overcome academic questions, but it could just as easily happen on the Main Line.

Villanova hasn't rejected a high-profile basketball recruit in recent memory, but the admissions office does prioritize academics in a similar way. While basketball gets some preferential treatment, the coaching staff is also discouraged from looking at junior college players or prospects who have struggled to get academically qualified in high school.

In other sports with less profitability, Villanova admissions has taken a much harder stance on admissions decisions. 3-star linebacker Corey Majors was turned away on football signing day in 2011 over academics. He didn't meet the standards that the admissions office required — Andy Talley was lucky to be able to get him on board after a year of prep school. This Spring, cornerback Mark Clements met the same fate, being turned away despite otherwise good grades because his SAT scores did not meet the admissions office's standards — he will also head to prep school, but could have easily committed to another school instead.

Would admitting those two athletes have harmed Villanova in the classroom?

Assuming they attended classes, studied and took their exams, not likely. There may have been a slight hit to the school's US News and World Report admissions averages, but not a significant one. It would take a major change to knock the university out of the number-1 regional spot. For the NCAA's purposes, as long as an athlete is progressing toward their degree, the school will receive a favorable APR rating.

On one hand, it is Northwestern’s commitment to academics that makes it such a unique place. We genuinely like being the only private school in the Big Ten and, at least for the revenue sports, doing things the "right way." Our players graduate on time and we feel fairly confident that they are in class and actually taking advantage of the opportunity in front of them.

On the other, Northwestern has made a deeper commitment to its athletic program. It has put in a lot of resources toward winning — including the marketing program and the upcoming facilities plan — and sometimes to get there rules can get bent. If there was ever a guy to bend the rules for, it was Brzoja.

Villanova has similar priorities, though perhaps without such lofty admissions standards. The willingness to stretch those standards to accommodate athletes at Villanova seems to be highly-connected to the profitability of the program recruiting them. Basketball gets a pass on most star recruits, while football seems to be held to a tougher academic standard.

What if basketball stopped turning a profit? If the Big East television contract were a flop, or if fans stopped showing up for highly-profitable Wells Fargo Center games, or season ticket hopefuls began to drop like flies from the waiting list? What if Villanova were forced to join a conference like the Atlantic-10, where about $1million in television revenue is split 14 ways ($71,428 per school/year)?

Would a less-profitable or unprofitable basketball program give the admissions office more power to say "no" to Jay Wright? At some schools, admission is not guaranteed for recruited athletes, even in borderline cases. The Brzoja case at Northwestern shows how these decisions can even be based on a translated foreign transcript — even when more recent, domestic grades were outstanding.