Ennis to play for Jamaica

Share All sharing options for: Ennis to play for Jamaica 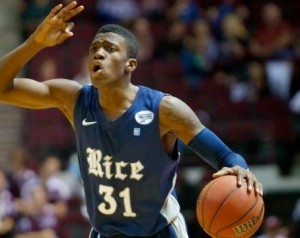 Dylan Ennis may be a Toronto native, but the newly-minted Villanovan will be representing his Jamaican roots in international competition. Representing a country in FIBA competition is a valuable experience for a young player and Ennis was hoping to be a part of that this summer. After exploring the possibilities, Ennis has decided that he will play for the Jamaican Senior National Team this summer, as Adam Zagoria first reported.

He flew down to the island recently and has been taking part in training with the team, starting this weekend. After his national team duties end, he will return to Villanova to finish the summer session.

Jamaica did not make the 2012 Summer Olympics in London, but will be in action this summer. They are slated to play in the 2012 Centrobasket Championship, organized by FIBA Americas, from June 18-24 in Puerto Rico. Their first game will be at 1:00 pm on June 18th, against Costa Rica in the round-robin stage.

"I would have loved to play with Team Canada, but it just didn't work out in my favor," Ennis said about his country of birth. "My father and I decided I would play for the Jamaican National team."

Ennis is eligible to play for the Caribbean nation because his mother, father and grandparents on both sides were born in Jamaica. That fact also gives him some very strong ties to the country, despite being born in a decidedly colder climate.

"I want to represent Jamaica in the best way I can by playing hard, doing anything they ask me to do, but to mostly learning from the coaches and the players that are in the program," Ennis added. "I believe it will be a very unique experience in which I will enjoy!

"With all the support from my family, as well as coach Jay Wright and the Villanova family I feel blessed to be here."

Ennis joins former Georgetown Hoya Patrick Ewing Jr. on the Jamaican roster. Roy Hibbert, another former Hoya, has also suited up for the Jamaican national team, though has apparently parted ways with the program. Former Louisville standout, Samardo Samuels (currently a Cleveland Cavalier) will be a part of the team this summer, as will Jerome Jordan of the New York Knicks. Other Jamaican players who have played NCAA division-I basketball include Michael Coburn (Rutgers), Michael Rogers (Valparaiso), Ryan Reid (FSU), Akeem Scott (High Point), and Terrell Christie (Southern Alabama).

Ennis will face-off against a Dominican Republic team that is coached by University of Kentucky coach John Calipari and will feature NBA talents like Al Horford, Charlie Villanueva of the Detroit Pistons and Francisco Garcia of the Sacramento Kings as well as top 2014 big man prospect Karl Towns. They come into the tournament ranked 25th in the FIBA World Rankings.

Puerto Rico will be the favorites to win the tournament with the number-16 ranking and a roster loaded with talent. J.J. Barea of the Minnesota Timberwolves, Carlos Arroyo, Peter John Ramos, Renaldo Balkman and Daniel Santiago will all play for the American protectorate.

10 Caribbean countries will take part in the Centrobasket tournament this summer. Jamaica was drawn in Group B, with Costa Rica, Mexico, US Virgin Islands and Dominican Republic; Group A includes the Bahamas, Cuba, Puerto Rico, Panama and Nicaragua. The semifinal round is scheduled to be played after the group stage, on June 23 with the finals and consolation game on June 24.

The tournament is staged every two years, in even-numbered years.

Four teams will qualify for the 2013 FIBA Americas Championship from the event and will be invited to attend a qualifying tournament for the 2014 FIBA World Cup in Spain. In the last edition of the event, Puerto Rico took home the title after defeating the Dominican Republic 89-80 in the final. Puerto Rico has dominated the event with 10 gold-medal finishes while Cuba comes in second with four.