Share All sharing options for: Future of Villanova Athletics 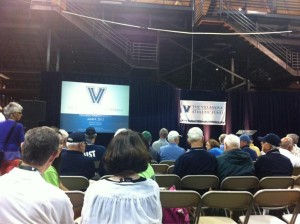 With Reunion Weekend in full swing, Vince Nicastro took to the (makeshift) Pavilion stage, to tell a crowd of assembled alumni about his department's plans for the future and the growth of Villanova's athletics programs. Whitey Rigsby made some remarks to open the town hall meeting before Nicastro kicked things off.

The future plans announced include new facilities projects and renderings were available to show alumni what that construction would look like.

Those projects include a new West Campus soccer complex, with a facelift and artificial turf, a new boathouse in Conshohocken along the river on property acquired adjacent to the current facility, and a major renovation to Butler Annex, creating an indoor practice field. The University is engaged in zoning and fundraising for all facilities projects at the moment.

Renderings for the football locker and weight room renovations that are planned for late 2012 were not shown, but according to a source, they were received by the athletics department last week, and fundraising for the football improvements is also underway. 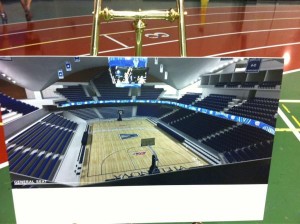 As for the Pavilion, renderings were shown of a brand new arena — with two decks of seats, high definition video boards and with bleachers along one sideline and one baseline (seeming to indicate a change in student seating). Multiple plans to replace or upgrade the on-campus arena have been considered and the estimated cost of upgrading the basketball facility will be between $50- and $80-million, depending on the extent of the project. A fundraising campaign to accomplish this improvement is upcoming.

A change would likely be a renovation of the existing building rather than a complete replacement. Seating could expand marginally or increase by thousands of seats, but according to Nicastro, maximum capacity of the project would be around 8,000 spectators. It is likely that capacity could remain unchanged, however, but with seating would be improved (more comfortable), as would the sight-lines.

Nicastro also talked about conference realignment, driven by television dollars, which creates a challenging environment for Villanova to navigate. About 25 of 31 Division 1 conferences have been affected by conference realignment. He summarized the comings and goings of teams from the Big East conference and noted that another western football-only member was likely to be added to the conference this fall.

For Villanova football, Nicastro discussed the question of FCS vs. FBS affiliation and told the crowd that the possibility of joining the Big East in that sport remains open. According to his remarks, the Big East will need to expand to 16 members or lose more teams for that to happen, however, which makes sense given that conferences don't seem to like the idea of having uneven numbers once they have split into divisions.

When asked about the possibility of moving football to a low- or mid-major conference and working toward a major conference move once a successful transition to FBS has been completed, he cited financial risk associated with that option. It would be possible for Villanova, but the money projected to come in from those conferences makes the risk much greater.

Villanova conducted the most comprehensive study of moving football to FBS that anyone has ever done. If the Wildcats were to make that move (assuming no changes), the team would make PPL Park its primary home, with Lincoln Financial Field also being an option going forward. The athletics department was very impressed with PPL Park.

Nicastro declined to answer questions about whether or not Villanova would have interest in joining the ACC.

Update: As of Monday morning, Villanova has declined to provide VUhoops with any additional drawings or renderings of facilities projects. According to Vince Nicastro, the renderings will continue to be vetted and altered before they are finalized and able to be made available more-broadly.

Much thanks to Nick C (@vuwildcat07) for helping compile this report.