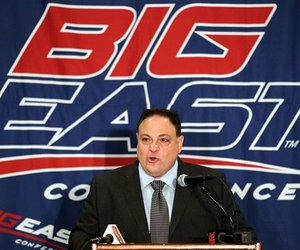 When John Marinatto "stepped down" as commissioner of the Big East conference, there was a lot of immediate speculation about who would succeed him in that role. The university presidents hired Joe Bailey, a former NFL executive, to fill in at the job in the short-term, but Bailey made it clear from the outset that he had no interest in making it a permanent gig.

"[T]he answer [on whether he wants the job] is a no with an exclamation point," Bailey told reporters. "I wouldn’t be interested in either the content of the work or the people that you would be working with or either personal or professional growth, because I think all of those are going to be here for this particular person.

The plan from the start was for the conference to retain the services of a search firm to help recruit a suitable candidate to the post. After concluding Spring meetings, the conference officials have been given the go-ahead to employ Russell Reynolds Associates, the very firm that interim commissioner Bailey was a partner in prior to joining the conference.

He will step down as soon as a suitable candidate is able to take over — hopefully by September, before the commencement of television negotiations this fall.

University of Cincinnati president Greg Williams is heading up the committee that was appointed to oversee the search. The conference has committed to paying the new commissioner a seven-figure salary. John Marinatto reportedly earned just $600,000 per year — less than Conference USA commissioner Britton Banowsky (who earns $900,000 annually).

According to CBS Sports:

Among the characteristics the next commissioner should have, according to RRA, include strong interpersonal skills, a servant leadership style, exposure to the media, superb managerial skills and a fabulous communicator. Experience negotiating with television networks is not essential, but can be learned.

There were reportedly four other search firms under consideration.