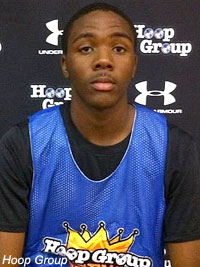 Villanova may still be looking for the first commitment from the 2013 class, but Jay Wright and his staff are making some progress will one local star in the 2014 recruiting class. Ja'Quan Newton, a point guard from Neumann-Goretti and Team Final (AAU), visited Villanova for the second time in the past 30 days on Monday. It was an unofficial visit, since 2014 recruits are not yet allowed to take official visits.

Newton was able to spend plenty of time on-campus, however, and the university treated him to some accommodations, as he was able to stay overnight in the dorms.

Recruiting in your own backyard has its perks, of course, and Newton has been no stranger since the Wildcats showed up on his recruiting board. He also attended the 2011 Hoops Mania celebration at the Pavilion.

According to CBS Sports' Jeff Borzello, Newton is one of the top point guards in the 2014 class and will be solidly in the top-50 recruits in his class, if not better. Offensively, he is tremendously skilled as an attacking guard who can beat practically any defender off the bounce and get to the rim at will. He can also draw defenders in the lane for a foul or use the opportunity to find an open teammate. He did an excellent job facilitating the half-court offense for Team Final in last summer's AAU circuit.

Descriptions of his style of play and talent sound very similar to other lead guards that Jay Wright has deployed in the last decade, with varying levels of success. He has continued to work on his jumpshot and his defense to grow his game and become a greater threat in college.

He holds offers from Villanova, Syracuse, Georgetown, Temple, Saint Joseph's, Rutgers, and Miami, among others. The fact that he has been spending so much time around the Villanova program doesn't guarantee that he will ultimately commit to play for Jay Wright, but it is a good sign that he will seriously consider the Wildcats.