Share All sharing options for: Reggie Cameron to visit Friday 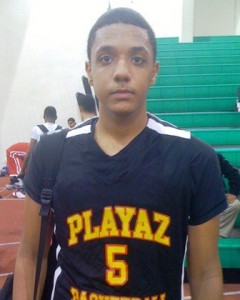 Jay Wright hasn't yet secured a commitment from a class of 2013 prospect, but he hasn't stopped grinding to get one either. Villanova remains in the hunt for a few big names in that class, and on Friday, they will apparently play host to one of the top small forwards in the northeast, when Reggie Cameron visits campus (unofficial). Reports of the visit began to surface this afternoon after Cameron tweeted about it.

Cameron is an excellent shooter, which is a skillset that the Wildcats were lacking in 2011-12, and he has good size for the 3 at 6'7" and 215 pounds. His handle is still developing, but Cameron knows that he will have to put the work in to get to where he wants to be -- he spent most of last summer working at Sports U in Fairfield, NJ (when he wasn't playing with the Playaz Basketball Club AAU team) to develop his body, become a better defensive player and to expand his game on offense.

On the Nike EYBL circuit this summer, Cameron has reportedly connected on 44 triples in 14 games.

"He’s a very, very driven young man," Hudson Catholic coach Nick Mariniello told North Jersey.com. "The fact that he has had success at things he might not have been successful at, and he sees the progression in his game, the proof is in the pudding for the hard work he has put in.

"He’s got a really high skill set, but he has worked tremendously hard at expanding his game, whether it’s being around the low post or guarding wing players."

Villanova has offered Cameron a scholarship and would clearly benefit from his sweet shooting stroke and expanding offensive skillset. He would also be a good fit for the Main Line school academically, making the honor roll at Hudson Catholic.

His visit coincides with the start of Villanova's high school boy's team overnight basketball camp, which runs from Friday into Saturday. According to his Twitter account, the two occurrences are connected, with Cameron expected to participate in the camp on Saturday.

To land the coveted 3-star talent, the Wildcats will have to beat out most of the Big East and ACC, as well as a few Big Ten and Big 12 schools for his services. North Carolina has recently had an eye on the star forward as well, though the Tarheels have yet to issue an offer (according to Cameron, UNC might not decide on an offer until after the Peach Jam -- near the end of the AAU season). He also lists Oklahoma, Harvard, Minnesota, Michigan, Seton Hall, Florida, West Virginia, Miami, DePaul, Cincinnati, Xavier, Rutgers, Northwestern, Notre Dame, Clemson, and Providence, but he claims to have no favorites.

He plans to narrow his list in August, after the July open recruiting period ends, and once he has a better idea of where he stands with schools. His goal is to have a final decision made by November. 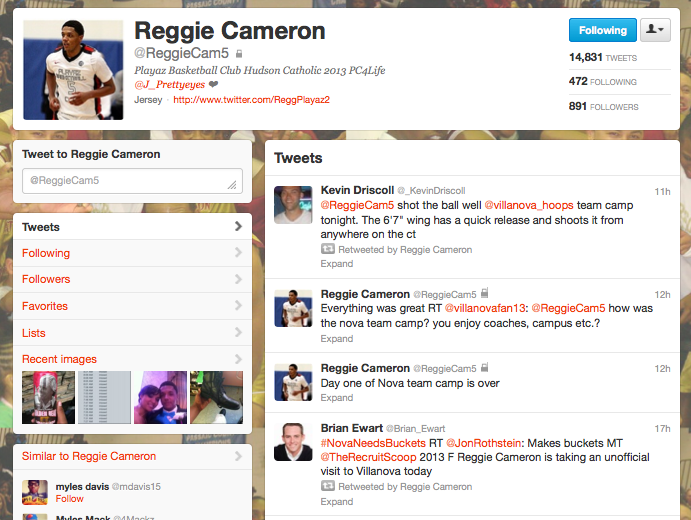