Share All sharing options for: Tyrell Judson: a case-study in efficient recruiting 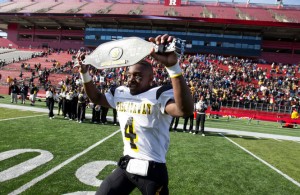 Villanova is no stranger to multi-sport athletes. One needs to look no further than Matt Szczur, who was unstoppable on the gridiron in college while making a name for himself in the offseasons playing baseball. At some point, these athletes have to choose a path -- they can't all become Bo Jackson -- but while they are in college, dual interests can often be accommodated. Mostly, this has resulted in Villanova football players appearing on the baseball roster in the Spring, but in the past (and before the season's overlapped) the university also saw some football players moving indoors, to play basketball in the winters.

For football, being able to offer an interested athlete a second sport offers a recruiting advantage over schools and coaches that would want a player to choose between interests. For the other sport, it often means being able to recruit athletes that would otherwise put the program over the scholarship limit.

It isn't always easy, however. The baseball team's in-season program in the Spring will limit cross-over players from some practices and work-outs with their other team, but it doesn't prevent them from taking part in some activities and learning nuances. Other sports, like lacrosse, are too intensive during the Spring and Fall to allow an athlete from another team to fully participate in both (sadly, that will likely prevent freshman wide receiver from grabbing his lacrosse stick at Villanova).

What Villanova hasn't seen much of in recent years, is a cross-over between other sports and Track and Field. Cross-country and distance runners don't usually play other sports, but sprinters and field event athletes often do so part-time at other schools.

In fact, one would argue that in 2009, when Villanova won the FCS football national championship behind the sub-4.4s 40-yard dash times of Matt Szczur and Angelo Babbaro (among other speedsters), that there was no excuse for the track program to not generate some notable performances in the Spring as well. Sprinting is an important skill in football; the game is played in quick, short bursts and the faster a player can run over a stretch of 10- to 100 yards, the more likely he is to create a big play.

Unlike distance running, sprinters don't need to worry about excess muscle-weight slowing them down over the course of a race.

In other words: running some sprints for the track and field program in the offseason could actually help some skill-position players to develop more speed to be put to use on Saturdays in the Fall.

So why didn't we see more of it? Matt Szczur preferred to play baseball in the Spring and nobody was going to tell him not to. Other players may not have an interest in doing both. That said, when recruits express an interest in running track during their offseason, the efficient thing to do is for both team's coaches to work together in recruiting them. Football can perhaps land a bigger talent, while the track team can use a football scholarship to add some speed to it's shorter-distance races.

That appears to be exactly what Villanova is going to do this Summer.

While the football coaches were the first to get in touch with Piscataway (NJ) High School's Tyrell Judson, the track and field program also reportedly has begun to recruit him. Judson is a running back and linebacker at Piscataway, but Villanova's football coaches like him better on the defensive side of the ball. In track and field, he has run some relays and competed in the 200 meter dash, but his specialty appears to be the long-jump and the triple-jump.

A quick review of his Twitter feed shows that he is very interested in continuing to play both sports in college, but Villanova and Stony Brook are the two schools (thus far) that are recruiting him for both teams.

Judson is also a high school wrestler, for the record.

Will this be a trend for Villanova going forward? The men's track program has landed some good and great long-distance and middle-distance runners in recent years, but the shorter races have tended to be overlooked. Working with football (and for that matter, basketball, soccer, and others) to land some extra scholarship athletes to help in those races would go a long way toward building a more well-rounded track & field program.

A significant number of high school athletes play a different sport in each of the three seasons, so the opportunities are out there to do so.