Larry Brown's Bear-hunt; Baylor out for Harrisons, SMU in

Share All sharing options for: Larry Brown's Bear-hunt; Baylor out for Harrisons, SMU in 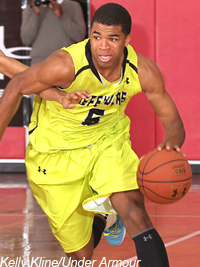 Andrew Harrison, the point guard side of the super-talented Harrison twins-duo, told Bill King this morning on his radio show that he has eliminated home-town school Baylor from the running. Instead of the Baylor Bears, Harrison will be considering the SMU Mustangs – and since previous statements made by the brothers have indicated that they intend to enroll at the same college, it can be inferred that this change applies to his brother Aaron as well.

6:37p Update: Per Adam Zagoria on Twitter: ""Harrison twins confirmed to @EvanDanielsFox their top 4 is Nova, Baylor, MD and UK and will announce Oct. 28 http://t.co/Gibo0zcm" It doesn't seem like their interest level in either Texas school is very high, regardless.

The Harrisons visited SMU a few weeks ago, after legendary coach Larry Brown took over that program. They were apparently impressed by Brown’s pitch and by what they saw on the Dallas campus, but it was believed at the time that the woeful Mustang program was a distant fifth on their list. Instead, it appears that Baylor was caught standing on the tracks while the Pony Express came chugging through.

The final four schools for the Harrison twins – this week – are Villanova, Kentucky, Maryland and SMU. According to King, there are no favorites in that group, though he thinks the brothers are most-likely to choose Kentucky.

The 6-5 twins have had more time recently to think about their recruitment after being cut from the USA Basketball under-18 national team at the same time as Villanova freshman, Ryan Arcidiacono. The brothers had assumed that they would be travelling to Brazil with the national team – it is rare for the top-ranked players at any position to be cut – instead, they became a late addition to the NBAPA Camp at the University of Virginia.

Observers will be watching the brothers closely to see how they react to the competitive set-back.

Andrew Harrison is ranked as the third-best player in the 2013 class and the top point guard, after flashing his polished skillset on the recruiting circuit. His brother Aaron is ranked eighth in their class overall. Both are adept scorers, using athleticism to blow past defenders and get in the lane and finishing at the rim.

With their excellent size, both brothers have potential to develop into great defensive players that can guard either guard spot or the small forward.

Recent reports that Markus Kennedy was reconsidering his decision to transfer out of the Villanova program were perhaps a bit premature. It seems that the relationship between Kennedy and the Villanova coaching staff is not strong enough for the big man to make a return.

CBSSports.com's Jeff Goodman tweeted this morning that a source told him that "Kennedy's days at 'Nova are definitely over." He is reportedly considering a number of schools, including Florida, Ohio State, Georgia Tech, Auburn, Rhode Island and Boston University.

2013 combo-guard prospect, Allerick Freeman told Jason Jordan of ESPN that his list of schools now comprises, Kansas, Villanova, UCLA, Ohio State and Duke. Freeman told Clint Jackson that Villanova and Duke were recruiting him the hardest out of that group, however.

He has visited some of those schools already, including Villanova and Kansas, but has no official visits scheduled yet.