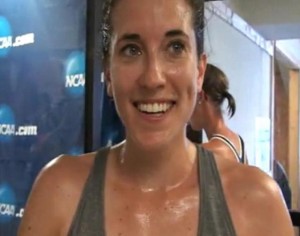 After ending a dominating career at Villanova, Sheila Reid will continue her running career competing as a professional. She signed with Flynn Sports Management on Thursday according to Villanova Running. The agency is headed by former Irish miler Ray Flynn and is no stranger to the Villanova program, also representing alumnus and former All-American Marina Muncan.

In track and field, professionals don't compete in a different league from the amateurs, there is no draft, teams or salaries. What sets these runners apart is money earned from endorsement deals and other such arrangements. Reid's combination of running success and marketability will make her likely to be a successful pro. She won individual national titles in Cross Country in 2010 and 2011 as well as in the 1500 Meters and 5000 Meters in the Spring 2011 outdoor season. She also holds team titles in the Indoor Distance Medley Relay (2011) and Cross Country (2009/2010).

Flynn Sports Management represents a significant number of notables in the running world, and they obviously have the wherewithal and connections to help their clients achieve successes on and off the track.

Reid has been up there with the upper echelon of athletes at Villanova in terms of success during her time at school. Few recent Villanovan's can claim as much success in their tenure (though, to be fair, Reid's sport ran for three seasons and had at least three-times the number of opportunities to win).

This signing will allow Reid the opportunity to continue training full time, which will be important if she hopes to continue competing at an elite level — and to qualify for the Olympics.