Walk-on receiver is ready for prime-time

Share All sharing options for: Walk-on receiver is ready for prime-time 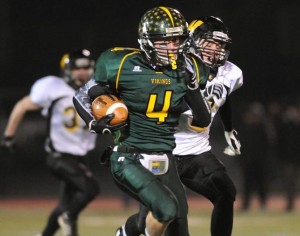 Villanova football does extremely well running the ball, but for the offense to work, the receivers have to make their blocks and run the routes they are assigned effectively. In recent years, the Wildcats have done well at accumulating talent at receiver, with Matt Szczur dominating out of the slot, Brandyn Harvey signing with an NFL team out of college, Norman White looking likely to be drafted next spring and Jamal Abdur-Rahman poised to grow into one of the nation's best.

Add Kevin Gulyas to that list. The preferred walk-on kind of fell into Villanova's lap this Spring after bigger schools passed on him, but his record-setting high school career wasn't lost on the Big 33 game selectors. Gulyas joins a long line of Villanova recruits, including Rahman and fellow incoming freshman Corey Majors, to play in the charity showcase event and joins Hall-of-Famers like Joe Namath, Dan Marino, Jim Kelly, and Curtis Martin as a Big 33 alumnus.

He recently spent a week going through two-a-day workouts with the coaches picked to lead the Pennsylvania squad in the game. Blue Mountain HS's Mike Brennan, the head coach, was very impressed with Gulyas during those workouts.

"He runs incredible pass routes," Brennan told the Allentown Morning Call. "He has incredible hands. He has a tremendous feel for the game. He has great football savvy. Villanova got a fabulous football player and absolutely got a steal.

"He's certainly one of the most dynamic players in Pennsylvania. I think he has a chance to be a star at the next level and a standout in this game Saturday night."

He also has managed to add about 15 pounds to his frame since the high school football season ended by lifting even during the lacrosse season. He now weighs in at 190, and will be able to use that strength to contribute immediately at Villanova — but likely not starting at receiver. In the Wildcat's usual offensive formation, there are three wide receivers and only one in the slot (where Gulyas figures to play), but rising-sophomore Jamal Abdur-Rahman likely has that job on lockdown.

Gulyas could see some duty as a back-up, however, and the Morning Call suggests that he may also take the field on special teams. He averaged 19.6 yards returning punts as a senior at Allentown Central Catholic, and with his bigger and stronger frame, he may also offer something as a blocker.

All his success isn't stopping him from working hard this summer to improve his ability to grab balls in traffic.

"I had 122 [catches as a senior], but I dropped a lot," he said. "I want to be able to make catches in traffic, because I'm going to be working in the slot [at Villanova]. I've been working out to get stronger and working on grip strength so I can hold on to the ball better." 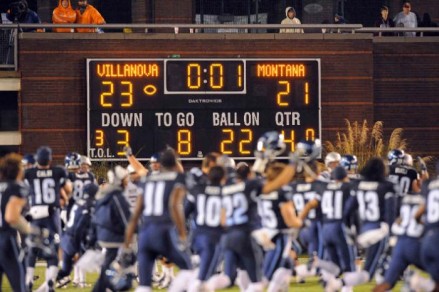 In 2007, however, the program ditched the offense that they had so much success with and went to a faster, more up-tempo style pioneered by Chip Kelly at UNH and popularized by him at Oregon. Instead of playing with two-backs, the offense would primarily operate from a single-back set, run most plays out of a shotgun instead of under-center, use zone-blocking instead of man, and run a different type of plays.

The 'Cats were mostly a winning program, but were rarely a playoff contender at the end of the season in the years since Brian Westbrook graduated, so in 2007, the program took a look at what they had in place and pulled the trigger on a new scheme that would better complement their talent. The Fall of 2007 was also the first time that Matt Szczur and Chris Whitney would appear on the Villanova Stadium turf.

Whitney wouldn't be taking signals from coaches and relaying them to the huddle like his predecessors. Instead he would be asked to read his plays off of poster-boards with a selection of seemingly-random images.

Flinn described the learning process for the football staff converting to a No-Huddle offense:

We were equally fortunate that the elite No-Huddle offenses in the country opened their doors to us. Places like Central Michigan (now the staff at Cincinnati), Appalachian State (who we ended up playing in the Playoffs in 2010), Missouri, Florida, Louisiana Tech and a host of others were extremely helpful. Coaches like Zach Azzanni (then at Central Michigan now at Wisconsin), Mike Bajakian (Cincinnati), Scott Satterfield (App State), Brian Jones (Missouri), Pierre Ingram (LA Tech) and Zach Yenser (LA Tech) gave us volumes of great information. Once we saw the No-Huddle being taught in the meeting rooms and in action on the field, we were convinced it was the next logical step for our offense.

The most immediate benefit we saw from the No-Huddle was the pace of practice. Watching Central Michigan practice under Butch Jones in the spring was what I thought a practice should be; there was no down time, excessive amounts of reps, and the entire team was involved in practice at all times. Watching the Chips practice was like watching gasoline being thrown on a fire play-after-play.

The No-Huddle offense immediately saw the Wildcats returning to the playoffs, and to a National Championship shortly thereafter.

It changes how the entire team is able to operate, a slow-operating huddling team can't run enough plays to hang big scoring numbers on opponents. That puts significantly-more pressure on the defense, who may have to eschew some big-play opportunities to grind out stops. Those big plays include the three interceptions grabbed by James Pitts against UMass last fall, leading to the biggest win of the season for the otherwise-struggling team.

Flinn goes into a tremendous amount of depth on the offense's progression, and the article is a very interesting read for any football fan.