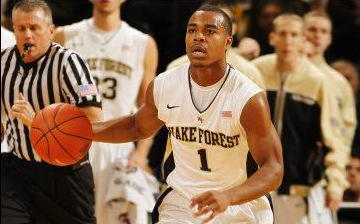 There may have been little doubt about it, but Tony Chennault's application to the NCAA for a hardship waiver that would allow him to play immediately at Villanova -- instead of sitting out a year after transferring from Wake Forest -- was officially granted today. He transferred from Wake Forest after the end of the Spring semester to be closer to his family, in particular his mother, who has had health issues since he had been away at school.

Chennault will be eligible to be on the Wildcats active roster when the 2012-13 season begins and will have two seasons of college basketball remaining.

"The Chennault family has been dealing with so much this year," stated head coach Jay Wright. "Tony’s mom has faced health issues and his brother, Mike Jay, died tragically earlier this month. We are grateful that the NCAA has taken these unique circumstances into account and I know Tony is excited about the opportunity to be on the court with us next season."

Chennault averaged 9.2 points and 2.8 assists last season at Wake Forest. Only JayVaughn Pinkston (9.6ppg) and Mouph Yarou (11.3ppg) return more points on average to the Villanova squad. Chennault will bring the highest scoring average in the Villanova backcourt going into the season, with James Bell checking in at 7.0 points per game to lead returning guards.

Chennault would have been among Villanova's guards in field goal percentage to Maalik Wayns last season, but would have been next-to-last on the team in free-throw shooting at 64.8%. He was also not a strong 3-point shooter, making just 25%.

If Chennault can improve his free-throw percentage, however, he will draw enough contact in the lane to become a much more efficient scorer, and would easily drag his scoring averages into the mid-teens.