Have you seen this man?

Share All sharing options for: Have you seen this man?

Derrick Snowden played guard for Villanova between 2000 and 2004, averaging about 30 minutes per game as a sophomore and junior. His best season was in 2001-02, when he averaged 10.4 points, 3.9 assists, 2.5 rebounds and 1.6 steals per game, shooting 46.1% from the field. Things trailed off in the next two seasons, but Snowden was a solid contributor and was well-liked by his teammates.

Snowden was not destined for the NBA, however, and when he left Villanova after his senior year, he headed abroad to continue his basketball career as a professional. Then-assistant coach Ed Pinckney was able to help him land with a team in Europe. He stuck over there for a little bit, last being seen on the court for BK Pardubice of the Czech Republic in 2005. 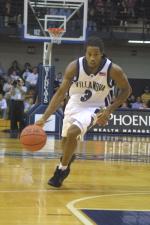 Then Snowden suffered an injury. In Europe, it is not uncommon for a team to cut an injured player to save costs, so upon news of his injury, he was sent home.

According to the grapevine, Snowden returned to his home state of Maryland and has been working there.

Through all of this, however, the former Wildcat guard has apparently lost touch with most of his former teammates and coaches. It is for that reason that we are asking you to leave in the comments, any information that may help uncover the whereabouts of this missing member of the Villanova family.