Is Notre Dame on the move?

Share All sharing options for: Is Notre Dame on the move? 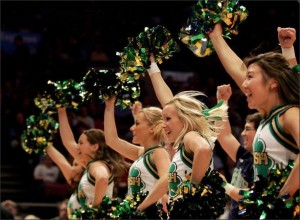 Notre Dame has been a non-football member of the Big East conference since 1995, but rumors were being thrown around the internet on Wednesday that the Irish might be ready to ditch their Big East affiliation in favor of the Big 12. According to the reports, the Big 12 would be willing to accept Notre Dame's basketball and Olympic sports without requiring them to join that conference in football — but they would require the Irish to schedule a certain number of football games against Big 12 schools.

That rumor was passed around on some fan sites and message boards, and most-notably by the Rivals.com University of Texas columnist, Chip Brown. According to Brown, the Irish could announce a move to the Big 12 by the end of the summer and would agree to play six football games against Big 12 schools.

Notre Dame's athletic director, Jack Swarbrick was present at this week's BCS meetings in Chicago, where he agreed with the BCS conference commissioners to propose a 4-team playoff to determine the FBS national champions. After the negotiations, Swarbrick was among the officials who spoke to reporters at the hotel where the meetings were held.

Asked about the rumor, Swarbrick joked to the Chicago Tribune, "I saw that and I thought [Big 12 commissioner Bob] Bowlsby and I should hold hands up there.

"I have no idea what prompted that. It is not based on any discussion, any meeting we have done."

He then went on to give a more detailed response:

"The third is related to the stability of the Big East, which we get more information on every day. In that sense, pieces of that are starting to fall into place, and that will put us in a time and place where we probably take a look at it and decide what we're doing."

Swarbrick indicated that there haven't been an discussions or meetings about joining the Big 12, but he also hasn't slammed the door shut on any conference moves. Whether a move happens will depend on those three factors, however, with the most vulnerable area being the stability of the Big East conference.

It is expected that Notre Dame's new TV deal with NBC will be a lucrative one for Notre Dame and they will ultimately have the same level of access to the new playoff system as everyone else.

Why it could happen: Notre Dame wouldn't dramatically change it's position in basketball by changing conferences, and while the television revenue might not be much different from the Big 12 than it is from the Big East (it could be less), such a move would be mostly about money. The Irish could create their own TV network (akin to the Longhorn Network) if they were in the Big 12, whereas the Big East might not be as fond of that idea.

Such a network would rely on third-tier television rights for content, which would pull mostly from basketball and olympic sports — the teams that are currently parked in a conference. The Big East hasn't commented publicly on whether a Notre Dame Network would be allowed by the league, but the Big 12 clearly will allow it.

Big East stability is also important. If the conference were to lose Louisville and UConn or any other pair of elite basketball schools, there would be an argument that the Irish should move their programs to a conference that would be better equipped to provide a high level of competition — and offer access to the post-season. That won't be a problem in the new Big East while things seem to be stationary, however.

Why it would be silly: The Big 12 doesn't have basketball-only members and there is no easy answer for them to figure out what Notre Dame basketball is worth. Television networks have been hesitant to offer significantly greater money to the ACC and SEC when renegotiating those television deals post-expansion, and it's even less likely that the Big 12 will be able to significantly increase it's television value by adding Notre Dame without their football TV rights.

Moreover, the next Big East TV deal will very likely be signed with Notre Dame's television partner, NBC. According to former Memphis athletic director R.C. Johnson, the Comcast-owned network would be interested in packaging Big East games alongside Notre Dame for football.

"(NBC's) purpose (at the meeting) was to show they had an interest in the Big East and they had it tied in with Notre Dame football," Johnson said. "They talked about doubleheaders and tripleheaders on the NBC station. Not on the Versus or whatever they all have, NBC (Sports Network), because they've got several cable outlets.

Technically, that wouldn't require Notre Dame to be a part of the Big East in basketball for NBC to follow through with it, but it is clear that the relationship between the school and the conference has an influence on the network's thinking. NBC is currently working on an extension to their Notre Dame football deal and if their parent company, Comcast, hopes to partner with the school on a new Cable network, it will be helpful if they owned the television rights to all of Notre Dame's sports — which can only happen if Notre Dame is in the Big East.

So take the Notre Dame rumors with a grain of salt. It is certainly possible that the Irish could be whisked away to another conference at some point, but it doesn't appear to be something that is close to being a "done deal." Expect the unexpected in conference realignment, but read rumors with a high degree of skepticism.