Share All sharing options for: Rondae says no to Nova; Roberson visits 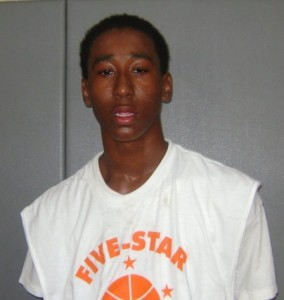 Rondae Jefferson is keeping just one Philadelphia-area school on his mind when it comes to his recruitment. The 6'7" wing has trimmed his list to just seven schools, according to a post on ZagsBlog, and Villanova isn't one of them. The talented 2013 prospect from Chester, PA still has his brother’s alma mater, Temple, on his list along with Arizona, Texas, Florida, Memphis, Rutgers and Syracuse.

Jefferson told ESPN that he cut his list in hopes that it would help alleviate the onslaught of phone calls and texts he was receiving from college coaches.

"It’s non-stop phone calls, and nobody wants to go through that," he told ESPN.com. "I just want to enjoy basketball."

According to ESPN.com, Jefferson's phone exploded with calls and texts from coaches at programs hoping to secure his services within minutes of the NCAA's unlimited calling and texting rule change going into effect. That change went into effect in the middle of the night, by the way, with coaches hitting "send" on their text messages at exactly midnight.

Jefferson wanted to "trim the fat" and reach a more obtainable number of schools to help control the calls and texts.

Villanova misses out on a dynamic 4-star talent on the wing. Jefferson is long and athletic player with good scoring instincts and the potential to become an excellent defensive player at the college level. He moves well with the ball in his hands and can seemingly score at will at his current level. In order to become a dominant college player, he will need to continue to develop his outside shooting, but he has shown some progress in that area lately.

Nova up next for Roberson

In his latest contribution to ZagsBlog.com, talented 2013 forward, Tyler Roberson noted that he is continuing to visit campuses officially. He recently completed visits to Seton Hall and Rutgers, the two schools in his home state of New Jersey, and noted that his next visit will be to Villanova.

This month I have taken two unofficial visits, one to Rutgers and the other to Seton Hall. I’m planning some visits to other schools as well. My next visit will probably be to Villanova. Syracuse, South Carolina, Cincinnati, Kansas, Alabama and Louisville are some of the other schools recruiting me.

According to the blog post, he is planning on cutting his list to 10 schools by August. In July, he plans to attend camps and tournaments and continue making campus visits.

(Update 6/26) According to his Twitter account, Rysheed Jordan took a visit to Xavier University in Cincinnati. The Vaux guard seemed to be very impressed by what he saw.

"In Cinn, visiting Xavier what a beautiful skyline ,,, this campus is beautiful,,," he tweeted.