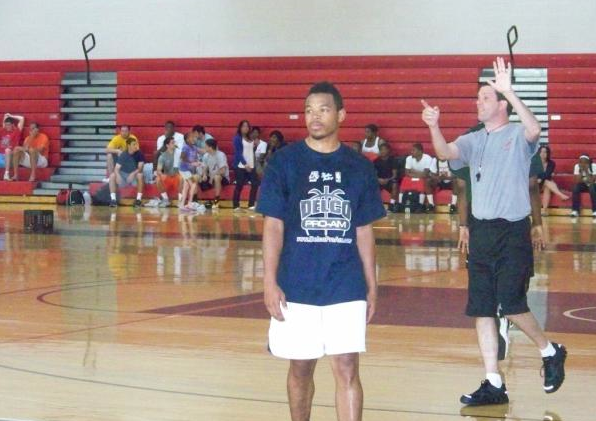 The Delco Pro-Am is a Philadelphia-area summer league that features current college and professional basketball players looking for some live game action in their off-seasons. This weekend, that league held the Jerry Dallahan/Steve Lewis Tip-Off Classic tournament at Haverford College's Douglas B. Gardner ’83 Integrated Athletic Center, and there was a strong Villanova contingent on the court.

The winning team in the Tip-Off Classic receives an automatic bid to the league's playoffs at the end of the summer.

Among the participants were current players, Mouphtaou Yarou, Ryan Arcidiacono, Ty Johnson, Tony Chennault, James Bell and Achraf Yacoubou, as well as alumni like Reggie Redding, Antonio Pena, and Corey Fisher. They didn't all play on the same team, but they did get a chance to see some success on the summer hardwood.

Fisher, Redding and Pena teamed up with Bell and Yacoubou on the Omega Medical team — apparently the Villanova stand-in — which won the league last season with a roster that also included Frank Tchuisi. They made their way to the semi-final of the tournament, it seems, but bowed out of the competition prior to the match-up because they couldn't field a full squad after the 7pm games.

In their first game, Fisher scored 15 points, while Pena matched that number in the first half and ended the game with 19 points. Redding added nine. Their second game against Ella Health saw another close victory, with Reggie Redding scoring 21 points to lead the Omega team and a strong first-half effort from Yacoubou who had 10 before the break. In their final game before leaving the gym, the Omega team was solidly beating Rise Academy Alumni and James Bell lead the way with 14 points in just the first half.

For Team Blue, Yarou teamed with Arcidiacono and Chennault, and they lead the Da Bottom team by two at half-time, but couldn't hold on. It was a close game the entire way, apparently, and the Da Bottom squad that featured Duke signee Amile Jefferson was knocked out on a buzzer beater. Arcidiacono was second on the team in scoring, nailing three triples and finishing with 12 points.

Team Blue ultimately advanced to the final round with a little help from some no-shows that caused a forfeit or two, but ultimately also had to leave the tournament before playing the Drexel Dragons team in the 7pm games.

Ty Johnson played on Team White along with Temple's Scootie Randall and Penn's Dau Jok, winning their first game, but suffering a 78-61 blow-out to the Drexel team in the second round. Johnson scored 15 points in that game, combining with Randall's 21 for more than half of the team's points.

Three teams featured at least one Villanovan in the tournament and two of the teams that had multiple Villanova basketball representatives went deep into the bracket before having to forfeit. In many cases those forfeits were so that the college players would be able to meet early wake-up calls the next day for their strength and conditioning workouts, or to attend class.

Whether the strong Villanova contingent continues in league play next month remains to be seen. It would be good for this team to see live game action in the offseason, even if it is a summer league — known for lackadaisical defense and shoot-first basketball. It would be great for the program if Yarou can develop chemistry with Chennault and Arcidiacono on the court, it can only benefit the big man from Benin during the Big East season.