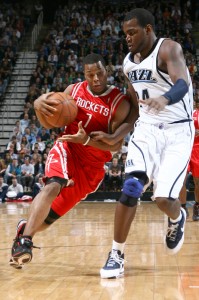 Kyle Lowry was a first rounder when he left Villanova in Spring 2006, after just two years (and 1.5 seasons) on the Main Line. He went 24th overall to the Memphis Grizzlies, so while he was made a rich man, he was about 10 spots short of the 14-pick "lottery," where picks are more highly valued by teams -- and where players dream of being picked. Randy Foye was picked in the lottery out of Villanova in the same year.

Now, six years later, Lowry may not only be a lottery pick, but possibly in the top-10.

After taking some time to emerge as a starting point guard, Lowry finished 6th among Western Conference guards in the 2012 All-Star Game voting, but based on the numbers, many believed he should have been selected for the game.

At the end of the season, Lowry had expressed to Rocket's management that he was not happy with the way that coach Kevin McHale divided time between himself and Goran Dragic. He asked that he be traded to a team where he could play a bigger role.

He just didn't believe that he could co-exist with coach McHale in Houston.

"If things aren’t addressed coaching-wise, I guess I have to be moved."

That rift between Lowry and McHale was never resolved. The Rockets hope to re-sign Dragic this summer, which won't help things for Lowry.

The Rockets, meanwhile are working hard to acquire draft picks in the first round to help them entice the Orlando Magic into trading Dwight Howard. They recently completed a deal, sending Chase Buddinger and the draft rights to Lior Eliyahu to Minnesota for the 18th pick in the draft. That won't be their last move though.

According to ESPN, they are still looking to shop Kyle Lowry and comply with his request, but they want to send him to a team with a pick in the top-10.

That is a huge rise in stock for the Villanova alumnus, and it is at-least partially driven by his salary-cap-friendly contract. Lowry is viewed as one of the NBA's better point guards and has two years left on a four-year, $24 million deal, and would only count $5.75 million toward the cap next season.

Dragic, meanwhile, is a free-agent who will command a large salary increase this summer.