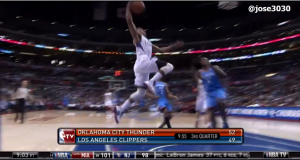 Randy Foye is heading into free agency once again, this time as an unrestricted free agent, which means that the Clippers will not have the opportunity to match an offer sheet and retain Foye if he chooses to leave. According to a report from ESPN, leaving might be the guard's preference, especially if the New York Knicks are interested.

Foye's last free agency saw him leave the Washington Wizards as an unrestricted free agent to sign with the Clippers, where he has played for the last two seasons. That move was believed at the time to be driven by a desire to get more playing time and for the most part it was a success, with Foye starting for long stretches during his two seasons out west. With star point guard Chris Paul added to the roster this past season, the Clippers broke out of their longtime mediocrity made it to the playoffs -- and Foye had a few big-time performances along the way.

Now, the sixth-year player reportedly is interested in taking his talents back east, to Madison Square Garden. The Knicks have a $3 million mid-level exception to offer, which is what Foye is seeking. According to the ESPN report, he expects to receive a number of offers in that range once free agency begins on July 1.

If the Knicks are interested, it will likely be based on something Foye did well last year -- shooting the deep ball:

Foye's specialty on the court would boost the Knicks in one of their weakest categories during the 2011-12 campaign: 3-point shooting (33.6 percent). During the second half of the season, Foye made the most 3-pointers in the league, even outdueling Steve Novakby two (87 to 85). While Novak had the highest percentage during that span (48.0), Foye was still lights out at 41.4.

The Knicks have multiple needs, however, so there is no way of knowing how things will pan out with them for Foye. It will, however, be something to keep our eyes on.

Update 8:45p - According to a source close to Foye, there is nothing to this rumor. It does not appear that Foye has any favorites prior to the free agency period.