Share All sharing options for: Cheek hopes to move grandmother from JC 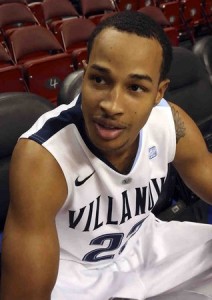 "If the NBA doesn't work out for me this year it's not going to stop me from ever playing in the NBA," Dominic Cheek optimistically told the Jersey Journal. "If there's a great deal overseas, I'm going to go over there and take the opportunity."

Cheek hopes that he will be able to play professional basketball next season. He has trained, been to the workouts, and signed with an agent. He may not be transformed into a rich man during Thursday night's NBA draft, but he is hoping to earn a good income somewhere.

His motivation is to take care of his grandmother, Izaphine Howard, who lives with his two brothers in a Jersey City apartment building.

"Without her, I probably wouldn't have been at this stage in my life -- going to college, going to high school and playing for (St. Anthony) coach (Bob) Hurley," he said. "It's time for me to repay her now. I don't want her to have to take care of me and my brothers all her life."

He wants to get his family out of that neighborhood and help them to move to somewhere safer.

"That's my number one goal, just to do that. I would be excited if I could do that."

According to the Jersey Journal, Cheek has promised his grandmother that he would return to school and finish his degree in the future. He leaves Villanova on good academic terms and has finished all of his academic obligations through his junior year.

That means that his early departure will have only a minimal impact (if any) on the Villanova program's APR -- a rating system used by the NCAA to determine whether or not to sanction programs for poor academic performance. It is separate from a graduation-rate, which is how schools like Kentucky can afford to have five or six players leave school early for the draft every year. Schools like UConn, however, have been banned from postseason participation when their players failed to complete their requirements and APR scores dropped too low.