Starting at guard for the nation of GEORGIA...

Share All sharing options for: Starting at guard for the nation of GEORGIA...

A lot of Villanova basketball players have played internationally at various levels of the game. Allan Ray, Randy Foye, Scottie Reynolds, James Bell, and numerous others from the Main Line program have represented their country at the youth level. Earlier this month, Canadian-born Dylan Ennis appeared for the Jamaican senior men's National Team in the Centrobasket tournament.

Now, Corey Fisher might be suiting up for Georgia — the country. 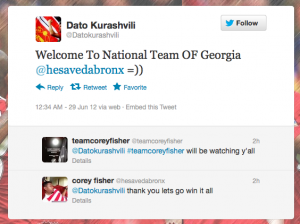 According to a Georgian player's Twitter account, he got a call from their national team coach early this morning, informing him that their new point guard was a player from Villanova — Corey Fisher. Fisher later retweeted and replied to a congratulatory message from another Georgian from his verified account.

Georgia's most notable player is probably Atlanta Hawks center Zaza Pachulia, who played against Villanova last summer at the EuroJam 2012 exhibition tournament in the Netherlands.

Fisher had never played at the senior national level for any other country, so the FIBA rules allow him to choose which nation to represent if he can qualify to play for more than one. Georgia does not appear to have qualified for the Olympic basketball tournament and will not appear in July's qualifying tournament.

In order to qualify to play for a national team, a player must hold the legal nationality of that country and have otherwise fulfilled the conditions of FIBA's eligibility. Fisher spend most of last season playing in the Turkish basketball league, and while Turkey does share a border with Georgia, that border isn't near Antalya, where Fisher's team was based. It is unlikely that Fisher obtained Georgian nationality by residing there, then, but there may be other means of obtaining citizenship under the law of that country.