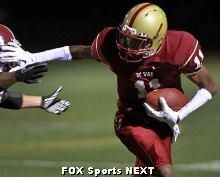 Jay Wright might still be waiting on his first 2013 commitment, but Andy Talley's wait for a verbal is over, with Boston College High School (Mass.) wide receiver Lincoln Collins has committed to the Wildcats. Technically, Villanova already has a defensive back lined up for 2013, with Mark Clements still expected to enroll after a year at prep school. Nonetheless, Collins is the first recruit from his class to give the Wildcats his commitment during this recruiting cycle.

"He's really ecstatic about it," his high school coach, Joe Gaff told ESPN. "He liked it from beginning, especially the academics of it. He wanted the academics. Just when he stepped on campus, he really loved the campus itself."

Checking in at 6-4 and 180lbs, Collins is another tall receiver that can use his size to beat smaller defensive backs, who could be deployed along with rising-junior Joe Price and incoming freshman Michael Burke. He has been a very strong downfield target and is considered one of the best rising senior receivers in Massachusetts.

"You see a lot of teams going to smaller receivers and here you have a kid who, at 6-4, is three or four more inches than most defensive backs and uses that height to his advantage," said former coach Jon Bartlett told the Boston Herald. "He’s a very coachable kid who just gets better and better every year."

He attended camp at Lehigh and received his offer from Villanova recently. He is rated two-stars by Rivals.com.

(special h/t to reader BarneyRubble for finding the highlight video)

UPDATED 7/2: ESPN's Boston High School blog spoke with Collins today about the commitment. Here are the highlights from the interview: