Is FBS really a bigger risk?

Share All sharing options for: Is FBS really a bigger risk? 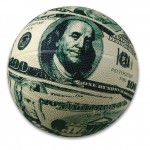 Temple football was losing approximately $600,000 per year while playing in the MAC, according to a recent report by the Philadelphia Inquirer's Keith Pompey. The Owls were playing in front of crowds that hovered somewhere in the mid-teens to low 20,000's for most games at Lincoln Financial Field (an almost 70,000-seat venue) and weren't the beneficiaries of a huge BCS-conference television distribution.

Villanova football loses almost it's entire budget of around $6 million per year. Revenue from season tickets isn't significant, travel costs are growing (with trips to Maine and Atlanta this season), and the one FBS opponent played every year pays out mid- to low- six-figures.

Of course, some of the difference is an accounting mirage -- the actual cost of educating student-athletes on a full scholarship is up for debate -- at Villanova, tuition and room & board are charged on the ledger at almost $50,000 for each of the 63 football athletes. At Temple, a year of tuition is a more reasonable $23,ooo for an out-of-state resident and it is just $13,000 for Pennsylvanians (even with room & board included, it is almost half the cost of Villanova), that is the number their athletic department must charge it's accounts for each of their 85 scholarship football players. So, Temple's scholarship cost is at least $1 million per year lower than Villanova -- but that doesn't make up the entire difference.

Temple is a bigger school with more students and state funding, so a $600,000 loss is more easily dealt with there than the seven-figure losses are at Villanova.

Football will lose money at a lot of schools, large and small, private and public. Athletics generally is a losing proposition for the majority of Division I, but that doesn't make it a bad thing, since playing at the highest levels brings with it benefits of alumni engagement, marketing exposure, academic affiliations with other quality schools and increased application and acceptance rates. In other words, when Division I schools lose money on athletics, they can and should consider it an investment in producing those benefits.

That's why Temple University is poised to add at least $10million to their athletics budget (with most of that going to football), as they make the move to playing football in the Big East conference. There is a risk that comes with that decision, but the Owls aren't thinking of it as a risk of loss, but an opportunity to buy greater exposure, branding and engagement.

Villanova, meanwhile, is highly unlikely to ever get much more of any of those benefits from the CAA or from FCS football than they have already received. The 2009 National Championship was great exposure, but who remembers it? People on the street don't think of Appalachian State as a three-time national champion, but as the "little guy" that knocked off Michigan at the Big House -- a great achievement, but not one that can be replicated at-will.

There is no more return to be had on that $6 million investment.

Maybe the University is thinking in terms of the up-front cost of facilities that would be incurred during a transition to FBS. Football support buildings, indoor practice fields and other physical plant upgrades would be needed. Those improvements were needed just to keep up with the CAA programs that Villanova wants to compete with, however, and they must be built to continue playing football well at any level.

In other words, facilities are a sunk cost.

Villanova is making some football facility improvements, but they are doing so slowly and cautiously. That would've been fine had the process begun 15 years ago as it had elsewhere, but the pace of change at Villanova has moved like molasses.

Temple had only minimal money coming from television in the MAC, mediocre-to-below-average attendance (ranked 81st out of about 128 FBS schools) and still managed to lose less money than Villanova's supposedly cost-effective FCS program.

Temple has proven that there is a model to live within your means and survive at the FBS level, and even to generate some significant revenue without being among top programs.

When you hear those numbers, financial risk seems like more of an excuse than an answer. It takes vision and a will to succeed. Villanova would like to join the Big East for football, but the conference has placed them on hold until the next membership crisis or expansion to 16. The Big East isn't the only football conference out there.

How much longer is high-level FCS football sustainable? How much higher will the costs go? ODU and Georgia State saw the writing on the wall: FCS is a poor business model.