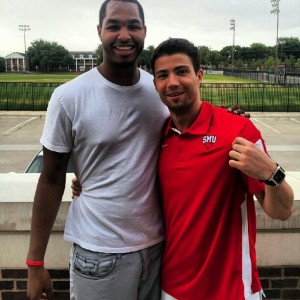 You've probably never heard of Jay Duncan, unless you were paying really close attention, or you happen to be a fan of NAIA Northwood University basketball. Duncan spent the last two seasons on the Villanova bench, however, serving as a graduate assistant coach, landing there with some good connections to the Wildcats program after playing for ex-head coach Rollie Massimino at Northwood from 2008-10.

On June 1st, however, Duncan was starting a new position as the video coordinator at SMU. Graduate assistant positions are time-limited by nature (you have to be a graduate student to serve as one), and with Duncan's time at Villanova ending with his Masters degree graduation this Spring, Larry Brown was able to swoop in and offer the Australian a job. He is already proving a valuable addition for Brown in the recruiting process.

He told Northwood media relations about the move:

"Coach Massimino was instrumental in helping me move into the coaching profession. Without him, I wouldn't be where I am today. Coach Wright was an assistant for Coach Mass at 'Nova, so when Coach Mass called him for me shortly before I graduated from NU, it was a done deal. I had the job. Now at SMU working for Coach Brown, I have the opportunity to learn from a hall of fame coach who is the only coach to ever win both an NBA and NCAA Championship. Having won the NBA title with the Detroit Pistons and an NCAA Championship with the Kansas Jayhawks, the opportunities to learn from his experiences are endless."

Duncan is proving to be key in at least one recruiting effort already, that of Villanova transfer Markus Kennedy. Duncan was apparently close with the big man during his year on campus and was there to welcome him to Dallas when he arrived for a visit yesterday.

So far the graduate assistant positions are the only spots on the coaching staff that will officially see a change for next season. This one, however, has had an impact -- at least for the SMU Mustangs.