Wayns to play for Magic this summer

Share All sharing options for: Wayns to play for Magic this summer

Going undrafted won't deter Maalik Wayns from seeking his shot on an NBA roster. According to reports out over the weekend, it appears that he has accepted an invitation to play for the Orlando Magic's summer league team. The summer league invitation is an extended opportunity to "try out," by playing for an organization against other unsigned players, drafted rookies and occasionally some more veteran players.

He won't just be trying out for the Magic's roster, however, as other teams routinely scout summer league events to get a look at unsigned players as well as to evaluate their own talent.

With Orlando trying to trade away their star player, Dwight Howard, this may be a good year for young players to make an impression with that organization.

The Magic are hosting the summer league in Orlando from July 9-13. Teams that are confirmed to participate include, the Orlando Magic, Brooklyn Nets, Boston Celtics, Philadelphia 76ers, Utah Jazz, Oklahoma City Thunder, Indiana Pacers and Detroit Pistons. Games will be open only to media and team personnel, but box scores and updates will be made available to fans on the Orlando Magic website.

The Magic roster is as follows: 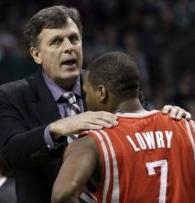 Kyle Lowry didn't mince words when he said that he wanted the Rockets to make changes or to trade him. It looked like trading the 26-year-old point guard was in their plans, however, with efforts to re-sign Goran Dragic seeming to take a priority. The Rockets reportedly viewed Lowry, with his affordable contract and impressive statistics, as trade bait -- potentially to pick up additional draft picks or as a piece in a larger swap for Orlando's Dwight Howard.

The Rockets could afford to part with Lowry because they believed that they would be able to bring back Dragic. According to ESPN.com, however, that is now in question and it seems that the two sides are "far apart" on a new deal.

If terms can't be reached to retain Dragic, then Houston would be left without a starting-quality point guard if they traded Lowry. That fact could leave their front office hesitant to pull the trigger on a deal.

Lowry was also one of top-three leading scorers for his team last season, along with Luis Scola and Kevin Martin. All three have been linked to trade rumors this off-season.