Share All sharing options for: Harrisons will commit sooner 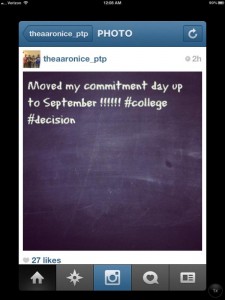 Aaron Harrison and his brother Andrew are getting closer to ending their college recruitment. The star 2013 guards are considering Kentucky, Villanova, Baylor, Maryland and maybe SMU, though few would currently expect them to choose either Texas school. Originally, the brothers had told reporters that they would announce their choice in October, around the same time as their birthday, but according to Aaron, the decision has been moved up to September.

Aaron posted on Instagram, "Moved my commitment day up to September !!!!!!"

Zagsblog.com was able to reach Andrew Harrison via phone this morning to ask about the posting and was told that the brothers had not yet picked a date in September on which to announce. They are hoping to have a commitment made before starting their final high school season, in order to avoid a lot of the media frenzy that other prospects, like Amile Jefferson, have had to deal with lately.

"I [will] probably commit before my senior season starts to get that weight off my shoulders so I can play without that on my mind," Andrew Harrison told SNY.tv from the U.S. U18 trials in Colorado Springs last month.