Can Reid still make the Olympics?

Share All sharing options for: Can Reid still make the Olympics? 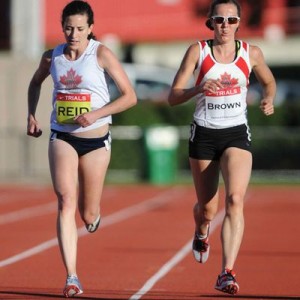 The Canadian Olympic track and field trials were held in Calgary last week, with Sheila Reid running in the 5000m final a week ago. She won that race, but the overall pace of the race itself was slow, possibly because the trials were held at altitude, which has a negative effect on distance runners' times. That slow pace meant that her winning time was below both the Olympic 'A' and 'B' standards that runners must meet -- but no Canadian athlete had achieved an 'A' standard in the 5000m, and Reid had previously attained the 'B' standard prior to the trials.

In fact, Reid was the only Canadian runner in the 5000m who attained even a 'B' standard -- which, for the record, is just 10 seconds slower than the 'A.' Nonetheless, her bid to go to the Olympics remains in limbo.

Winning her event at the trials and having recorded a 'B' standard wasn't good enough for Athletics Canada to select Reid to their team. She could have been picked to go despite not having the 'A' standard under the "Rising Star" provision, but the sporting authorities didn't feel that the NCAA National Champion runner had lived up to that standard. She appealed to Athletics Canada to reconsider and allow her to represent her home country in London, but the powers-that-be denied her appeal in the wee-hours of the morning of Canada Day (July 1).

That isn't the end of the story, however, since there is a second appeal available to Reid. She submitted her case to an independent board on July 3, and is still awaiting the results of that appeal.

"I was trying to do just enough to win the race," Reid told Simcoe.com. "I felt good halfway through, but I wasn’t going to take off and collapse later in the race."

The Olympics kick off in London on July 27, and presumably the entrants will have to be decided sooner than later.

Reid isn't the only athlete that has been burned by Canada's "Own the Podium" program -- which places their domestic standards above the Olympic standards. Nicole Forrester also won her event (the high jump) at the trials, making the Olympic qualifying height in the process, but she fell one centimeter shy of Canada's higher standard and had to pack for home instead of for London.

In most other countries, a win at the national trials would normally secure an Olympics trip. Canada places more emphasis on times than victories, however.

"In any other country you qualify by meeting standards and wins," she said. "This is time-chasing more than about wins. But I know the rules going in so there is no sense complaining about the rules half-way through.

"I do agree the Olympics are a special event and I think we should uphold a certain level of excellence but not at the detriment of athletes."

Reid's appeal is a longshot, however, but a chance to compete in London this summer would better prepare her for a bid to make the 2016 Olympics in Brazil. If she fails to make it to Brazil, she says, "I'd just have to realize I wasn’t good enough."

Regardless of what happens with the Olympics, Reid will be running this summer. She signed with an agent after graduating from Villanova this Spring and will be running professionally on the European circuit.