Nova hoops in the Delco Pro Am

Share All sharing options for: Nova hoops in the Delco Pro Am 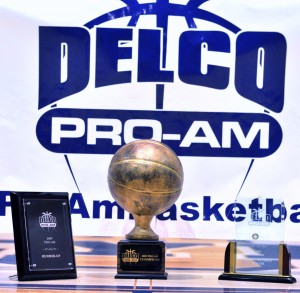 Summer leagues are a great way for basketball players of all levels to stay involved in somewhat-competitive games during the off-season. For Corey Fisher, the summer league playgrounds are where he built his legend -- scoring 105 points in a game in a 2010 New York City summer league. It is no surprise then, that once again this summer, many of the Wildcats current and former basketball players will participate in organized leagues.

The rosters for one particularly Nova-heavy league -- the Delco Pro-Am -- were released recently, and Josh Verlin's new site, City of Basketball Love, has the rundown.

The Omega Medical team might as well be called the Villanova Wildcats. That roster features alumni like Fisher, Allan Ray, Antonio Pena and Maalik Wayns (who will likely not play since he is committed to the Orlando Magic this summer), as well as current players, James Bell, Achraf Yacoubou and former Villanovan, Markus Kennedy. Current financier and former Nova forward Frank Tchuisi will also play with the team as he did last summer. It has been a long time since most Villanova fans have seen Ray play basketball in person, so it might be a fun summer treat to see him playing in Nova's backyard. Omega Medical also featured a number of Villanovan's last summer, and they went on to win the league. This roster will have a chance to repeat that feat.

Team Blue will be a mixure of players with connections to area schools. Two of Villanova's point guards for this season will be on the court, however, with both Tony Chennault and Ryan Arcidiacono running the Team Blue offense with Mouph Yarou manning the paint. That roster performed well at the league's tip-off tournament, so watch for them to make some noise as well. This will be an excellent chance to see how well Arcidiacono plays with another point guard on the floor, and to see what Chennault has to offer the Wildcats this season. Hopefully Yarou will develop some chemistry with his summer point guards that can carry over into meaningful games in the fall.

Perhaps the most intriguing team for Villanova fans will be The Champs. That team is headed up by Villanova alumnus and current Toronto Raptor's Director of Player Development, Alvin Williams, who will play alongside Kyle Lowry, who joined his employer's roster yesterday, and former Nova power-forward Chuck Kornegay. Williams last entered the Delco Pro-Am in 2009 with another team called "The Champs" and featuring Lowry at point guard -- that squad won the league title. Williams and Lowry will hope to do so again this summer. They will be joined by Sixers' broadcaster, Maalik Rose and Cuttino Mobley.

Finally, Ty Johnson will join walk-on Nick McMahon and Temple's Scootie Randall on Team White. Apparently, this will be an "iron man" roster, with just five players taking on all the minutes. McMahon will get plenty of game action, but count on Randall and Johnson providing most of the offense for this team.

The league kicks off it's action this Sunday, July 8th, with 12 games starting at 6pm, 7pm, 8pm and 9pm. Games continue every Monday, Wednesday and Sunday until July 29th, after which, the playoffs begin.

For a full schedule of games, check out the Delco Pro-Am website.

Updated 7/9: According to CoBL, both Daniel Ochefu and Dylan Ennis are also now on the Team White roster with Ty Johnson and Nick McMahon.