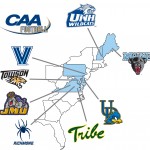 CAA commissioner Tom Yeager said that his conference's rebuilding was delayed by, among other things, graduation and vacations. That's the way things go in a midmajor conference raid, it seems, nothing near the table-clearing importance laid upon major conference moves by university presidents and officials. Still, according to Yeager, the end of rebuilding is in sight.

The CAA plans to finalize new members for their football and all sports conferences in the "coming weeks," according to a report from the Hampton Roads, Virginia Daily Press. The commissioner wouldn't reveal the names of any target schools or the dates he hopes to announce their moves by, however.

The primary criteria, he claimed, was "institutional fit," a crunchy term used by conferences big and small, and the reason why stormwater engineering rankings are commonly discussed during a sports-conference's introductory press conference (and yes, Villanova's President, Fr. Peter Donohue made a point to mention the quality of Temple's storm-water engineering...). It's also usually just a smokescreen to allow conference presidents to make business decisions seem like academic progress and satisfy their faculty and academics-minded donors.

Importantly, however, Yeager did reveal at least one common factor among the schools he has been courting of late (rumored schools include Appalachian State, Elon, Furman, Davidson, College of Charleston and Stony Brook, though, they won't likely go beyond 12 members in football or basketball).

"These are schools that want to compete, that want to be successful," he told the Daily Press. "They want to be able to match the resources and some of the bells and whistles that the schools they'll be competing against have. They don't want to be just another body on the schedule."

For football's sake, the hope will be that the conference can add, at the very least, a strong 9th member. In a dream scenario, however, the league would be able to add more football firepower than that.