Wayns to play for Golden State

Share All sharing options for: Wayns to play for Golden State 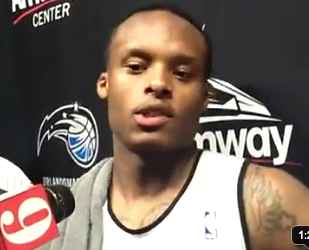 After Maalik Wayns wraps up his NBA Summer League stint with the Orlando Magic, his NBA tryouts won't be over for the summer. Instead, he will head west to Las Vegas, where he was training prior to the draft, to play in another NBA Summer League for the Golden State Warriors. He appeared on an official summer league team roster produced by the Warriors late last week.

The roster for the Las Vegas Summer League is over 20-men long, and that may be in anticipation of some late scratches. Players like Wayns could conceivably commit to a contract or training camp invitation after the Orlando summer league and withdraw from the Golden State team. Then there are injuries, foreign contract offers and other obstacles that might draw a player away from the later summer league.

Nonetheless, the opportunity in Las Vegas is a big one. With 24 NBA teams participating in a 60-game schedule, from July 13-22, there will be plenty of exposure for the Villanova guard to get in front of league executives and scouts in a live-game setting. Wayns impressed observers during his initial outing in Orlando, and he will hope to do so a few more times this summer.

The games will be held at UNLV's Thomas & Mack Center arena as well as at the Cox Pavilion. Tickets are available through UNLV's ticket office and the games will be televised live by NBA TV (and streamed live on NBA.com).

In his second Orlando summer league game, against the Detroit Pistons' team, Wayns was not able to repeat his double-double performance from yesterday. It appeared that he was injured in the first half, causing him to leave the court, but he did eventually return to the floor to finish the game.