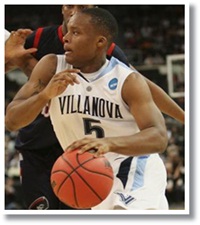 Maalik Wayns lead the Orlando Magic summer league team twice in three games during his current stint with that team, and although he'll soon be moving on to be a Golden State Warrior for the rest of the summer, he left a lasting impression in Florida. Team officials have been impressed with the undrafted point guard, and it is now believed that he may have played his way onto some team's roster.

"I think he’s done nothing but helped himself – not only for (the Magic), but in a lot of people’s eyes because he’s going somewhere else to play,’’ Magic head coach Mark Price said. "I think he’s played himself into getting a NBA job. I really like him a lot because he has a great heart and a great motor.’’

Wayns scored 16 points and dished out 4 assists during Wednesday's game against the Jazz. He also grabbed two rebounds and had two steals, but turned the ball over 5 times. He averaged 11.6 points and 5.6 assists in the three games and connected on 12-of-25 shots.

"I think I’ve shown that I belong,’’ Wayns told NBA.com. "A lot of people come in here undrafted and a lot of people were down on me after our season, but I feel I’m as good as any guard here who was drafted ahead of me. I feel like I’ve got something to prove and every day I’m going out there with a chip on my shoulder.’’

Orlando will play again on Thursday, but Wayns will spend the day travelling to Las Vegas, where he will play for the Warriors on Friday. He decided to split between the eastern and western summer leagues in order to play in front of all 30 NBA teams this summer.

Wayns has shown off his explosiveness off the dribble and played well in the pro-style pick-and-roll offense. He showed an ability to pass and set up teammates as well as score on his own account.

He played summer ball in Philadelphia with Magic point guard Jameer Nelson in each of the last few summers. That relationship would only help Wayns' case for a spot on the Orlando roster, should they be looking for an extra backcourt body.

Maalik Wayns is an unrestricted free-agent since he wasn't drafted and will look for either a contract offer or an invitation to an NBA training camp. The similarly-named Malik Allen also went through the same process after leaving Villanova, and the two have a good relationship, which may give Wayns an excellent resource for more information. Allen managed to not only make it onto an NBA roster, but to play in the league for a decade.

(h/t Fact on Nova Sports for the video)