Hunting for an NBA prospect

Share All sharing options for: Hunting for an NBA prospect

Jay Wright believes he still has a chance to get the supremely-talented Harrison twins to come to Villanova. He spent part of Wednesday, the first day of the July open recruiting period, watching the twins as they competed at a Reebok-sponsored event at Philadelphia University. He also watched Rysheed Jordan and Allerik Freeman, two other guards he is targeting in the 2013 class. 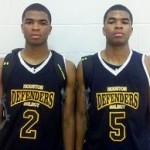 Andrew and Aaron Harrison did not disappoint at the showcase event, leading their team to a 100-61 victory over a team that I have been assured was not the Washington Generals. According to CoBL, Aaron connected on 55% of his shots from beyond the arc, scoring 28 points. Brother Andrew scored 11 points, adding five assists and six steals.

Four of the five head coaches recruiting the twins were sitting courtside at the game, with the lone absence being from Kentucky's John Calipari. The UK head coach is busy working with his Dominican Republic team and could not attend the event. The Harrison's list includes, Villanova, Kentucky, Maryland, Baylor and SMU. They hope to announce a decision this fall, between September and October, but an exact date has not yet been settled.

The brothers have something nice to say about every school on their list. About Villanova, they tell reporters, it's about "the way they use their guards." 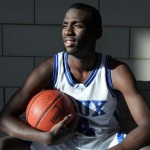 Rysheed Jordan also participated and showed off the point guard skills that have much of the country crossing their fingers over the Philly prospect. The 6-4 guard has excellent size to play the point, and seems to have the get-t0-the-rim instincts that have been common among Jay Wright's point guards.

Jordan told SNY.tv that he hopes to cut his list down to just 5 or 7 schools before the end of this month. For the moment, however, he claims to be "wide open." So far, in addition to Villanova, Temple and La Salle (which are nearest his home), he has taken visits to Xavier, Georgetown and Maryland. He has indicated that geography isn't a concern for him in the recruiting process.

"[I'm looking] for somewhere that I can go get an education and they will put the ball in my hands and let me play," he told ZagsBlog.com. 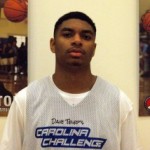 Allerik Freeman wasn't the recipient of as much media love as some of the other big names at the Reebok Breakout Challenge yesterday, but he still appeared to show off the skillset that has made him an attractive recruit for the Villanova program. He is a 6-3 shooting guard, who has the potential to also play the 3 for a team like Villanova. Described as a "Marquette-type wing" by ESPN, he was spotted yesterday getting into the lane with ease, showing off a quick handle from the wing.

If Villanova hopes to return to Final Four glory days, the program will need to lock down at least one elite prospect in the 2013 class. According to ESPN's Fran Fraschilla, the Wildcats need to land a great recruiting class because what they lack is a player whose talent screams "N.B.A."

"Talking to Jay Wright, they need a pro," Fraschilla told the Sporting News. "Right now they have a collection of nice players—I like their pieces—but the skill level is not where it was with Curtis Sumpter and Allan Ray and Kyle Lowry.

"They’re involved with the Harrison twins, and that kind of layer is exactly what the doctor ordered. I’m not sure there’s an NBA player on the Villanova roster. Until this past year, you could say they had NBA players or near-NBA players on their roster. They need a guy that can allow them to compete at the highest level in the Big East every night."

The Harrison twins could be a great haul for the Wildcats, but even if Villanova strikes out with those two, coach Wright will be staying on the hunt for a few big time talents in upcoming classes.