Dante II? .... William Schwartz of the Examiner writes, "Villanova fans have been waiting for Mouphtaou Yarou to explode ever since his arrival in 2009. Despite disappointing in Big East play, he has become legendary in pickup games, but not for the reasons you might think. While featured in the Nova offense as a back-to-the-basket player, when freed from Villanova’s offensive schemes he displays a deadly mid-range jump shot. In his sophomore year, he began taking jump shots in games and hit them with improved consistency in his junior year. His most memorable shot was a three-pointer in Villanova’s final game of last year’s Big East Tournament against South Florida. Wright has little choice but to give Yarou more offensive freedom this season with departures of Maalik Wayns and Dominic Cheek. The emergence of Pinkston and his physical play will allow Yarou to wander farther off the block to display an 18 footer that is reminiscent of a shot developed by Dante Cunningham in his senior year."

Movin' On Up ... In an article posted on the Orlando Magic’s official site John Denton writes, "Maalik Wayns has apparently played his way onto a NBA roster following three solid performances in the AirTran Airways Orlando Pro Summer League. That assessment comes from Magic coach and former all-star point guard Mark Price, who is endorsing the 6-foot-1 Villanova product as a NBA-ready player. ``I think he’s done nothing but helped himself – not only for the Magic, but in a lot of people’s eyes because he’s going somewhere else to play,’’ Price said of Wayns. ``I think he’s played himself into getting a NBA job. I really like him a lot because he has a great heart and a great motor.’’ Wayns strengthened his shot of getting invited to a training camp by once again playing under control and playing well on Wednesday. He scored 16 points and handed out four assists in Orlando’s 79-75 loss to Utah in third-day action of the summer league action at the Amway Center. ``It was really tough watching guys that I played against or had success against getting drafted,’’ said Wayns. ``I’m just trying to prove myself and play with a chip on my shoulder every day. I’m trying to be the hardest-playing guy on the court every day. I can’t worry about what’s going to happen because if I do my job everything else will take care of itself." As reported by VUH earlier this week, Wayns next heads to Las Vegas to play play in another NBA Summer League for the Golden State Warriors.

Coming to Their Senses ... As reported by VUH on Thursday, two-time Canadian national champion, 12-time All-American, five-time NCAA champion and Penn Relays champion Sheila Reid was one of five athletes added to the Canadian Olympic Track & Field Team for the 2012 Summer Games in London. Terry Toohey of the Delco Times writes, "Reid is the fifth Villanova Athlete to make an Olympic team for the 2012 Summer Games, which begin July 29 in London. Track athletes Marina Muncan and Adrian Blincoe will compete for Serbia and New Zealand, respectively. Former women’s basketball player Lisa Karcic is on the Croatian national team, while former men’s basketball player Andrew Sullivan will compete for Great Britain. Villanova has been represented at every Summer Olympics since 1948. "I think anyone who knows me and knows the kind of racer I am, knows I race to win," Reid said. "When you kind of chase the times it makes it kind of a different race. I’m just excited because I know that now that I have made it to this stage, I know I can kind of do my best and just run for place instead of just time."

Responding To Radnor ... The Radnor Patch reports that Villanova published a 39 page document responding to local residents’ concerns about its massive project to build new housing for about 1,100 students, a bookstore, convenience store and eatery as part of a $200-million-plus project that will be built on what is now two parking lots on Lancaster Avenue. Among the points addressed in the Villanova report was confirmation that the University does not intend to build a pedestrian bridge or tunnel at the intersection of Ithan and Lancaster Avenue, reasoning that students would need to walk up or down dozens of steps or very long ramps to achieve the necessary 15+ feet of grade separation from street level. Comparing pedestrian traffic to water seeking the path of least resistance, students would skip climbing the steps and continue to cross the street at the intersection. Responding to complaints about the height of the proposed four-story dormitories, Villanova responded "The structure heights are a result of design investigations to accommodate the targeted student occupancy while maintaining a college residential atmosphere. Varying building heights create architectural variety and visual interest."

One Set of Twins Is Good, But Two Would Be Better ... David Teel of the Daily Press writes about Villanova incoming freshmen twins Caroline and Katherine Coyer,"In the biggest basketball game of her career, before a capacity crowd of 7,500, Caroline Coyer was upstaged by a teammate. This was unfamiliar territory for Coyer, a dynamic, decorated and in-demand point guard at Oakton High School. But when Princess Anne shaded its defense toward her in the Group AAA state final, Coyer was more than happy to defer, especially since the teammate who then commanded center stage was her fraternal and, by three minutes, younger twin. Katherine Coyer scored 24 points, more than double her average, as Oakton routed the defending champions 58-39 to conclude a 31-0 season. She made 7-of-12 shots from the field, and 10-of-11 free throws on that March Friday at VCU's Siegel Center.Caroline scored nine. This one day after collecting Gatorade's Virginia Player of the Year award. ~ Assist to Brian Ewart

What Jay Yearns For … Michael Makubika, assistant men’s basketball coach at Southern Connecticut State University, shares a quote from Jay Wright in his blog indicating what Jay look for in the players he recruits. Says Jay, "A passion for winning is very important, and I like to see players with a good, positive attitude regardless if they are winning or losing. A player’s approach and attitude towards the game is vital. I also watch to see if they are making their teammates better because that’s key to promoting good team chemistry."

Yes, We Do Run Plays ... Basketballhq.com is a website providing a resource to basketball coaches providing a video database of basketball drills and plays. Included in their database is a video illustrating the Wildcat’s 2-3 Zone Cross Screen, Side Ball Screen Play, with the commentary, "Beating a zone requires players movement, ball movement, and driving the gaps. If you can set up a play that does all three of these things you are usually going to end up with an open shot. Look inside for the cross screen action and then if nothing is there swing the ball and play out of the ball screen. Be sharp on the play and keep the ball moving. Players off the ball need to be ready to shoot or find an opening to cut. ~Assist to Brian Ewart.

Early Honors ....Villanova University announced this week that 6-3, 220 pound "senior wide receiver Norman White has been named to The Sports Network preseason second team All-American squad. White returns to the field this season after missing all of the 2011 campaign with a foot injury.White had a breakout year as a junior in 2010 with 69 catches for 886 yards and 11 touchdowns. For his efforts in 2010, White was a first team All-CAA selection. For the second straight season, White will serve as a Wildcat team captain in 2012. White and the Wildcats open the 2012 season on Friday, August 31, against Temple at Lincoln Financial Field." ~Assist to Brian Ewart

Sweet Tweets … Here’s this week’s tweets from Jay Wright: "Have really enjoyed the opportunity to work with our guys in the gym this summer - new NCAA rule makes it possible and our game benefits! Best of luck to Maalik Wayns as he spends the week playing for the Magic in the NBA summer league! Great day Wednesday in Philly watching ball, evaluating the young guys, and catching up with other coaches! Best of luck to all of VU’s 2012 Olympians – Marina Muncan, Adrian Blincoe, Lisa Karcic, Sheila Reid and our own Andrew Sullivan! The fellas have been bringing it in our early morning workouts this week. Great leadership from Mouph." Jay also was interviewed by Mike and Mike in the Morning Show to discuss his impressions about participating in the ESPN Car Wash event. Click here for the replay of the interview.

Forget Texts, Get My Pen …. Daniel Martin of NBC Sports reports that former Jay Wright assistant and current Northwestern Assistant, Fred Hill, relies on hand-written notes to recruits rather than text messages, to lure recruits to Northwestern. "It paid off for Hill recently, as Northwestern grabbed a commitment from New Jersey guard Jaren Sina, a Top 100 player in the Class of 2013 and one of the biggest fish the Wildcats have caught in a while."There’s no rhyme or reason to the notes," Hill told HoopGroup.com. "There might be two or three notes at one time, but it could lead from a conversation that we had or just something that strikes me that’s pertinent to that young man’s life." In a recruiting world flooded with texts and phone calls (which Hill still utilizes) and social media (which he says he’ll stay away from), sticking to a proven method sets Northwestern apart."

Then There Will Be Five ... Adam Zangoria reported this week that Villanova target Rysheed Jordan was one of the top point guards at the Reebok Breakout Challenge. The 6-foot-3, 180-pound floor general from Philly Vaux Roberts says he plans to cut his list later this summer."I’m ready to narrow it down to five or seven schools in July, and am still wide open," Jordan told SNY.tv. Jordan’s group of suitors includes Villanova, Kansas, St. John’s, Xavier, Maryland, Temple, La Salle, Rutgers, Marquette, Georgetown, Syracuse and UCLA. He has visited Xavier, Georgetown, Maryland and the Philly schools. I'm looking for somewhere that I can go get an education and they will put the ball in my hands and let me play," he said. Zangoria also wrote that Villanova recruits Aaron and Andrew Harrison put on a show here in their first game Wednesday at the Reebok Breakout Challenge. "Aaron poured in 28 points, hitting 6-of-11 3-pointers, and Andrew added 11 points, with 1-of-2 treys, in a 100-61 rout of the Answers at Philly U. Baylor coach Scott Drew, Maryland coach Mark Turgeon, SMU coach Larry Brown and Villanova coach Jay Wright sat courtside.

And They're Off ... Kellon Hassenstab of NBC Sports writes that "Wednesday kicked-off the first of three four-day recruiting periods as college coaches will evaluate prospects at NCAA certified events from coast to coast. Last year’s July calendar offered two 10-day long evaluation periods that understandably often resulted in listless play from fatigued prospects as each period ended, making this year’s format an upgrade. Many of the prospects on the short lists of the respective colleges have been identified and evaluated during this year’s new re-opened live weekends in April, and July will be a second extended opportunity for the players to be evaluated." 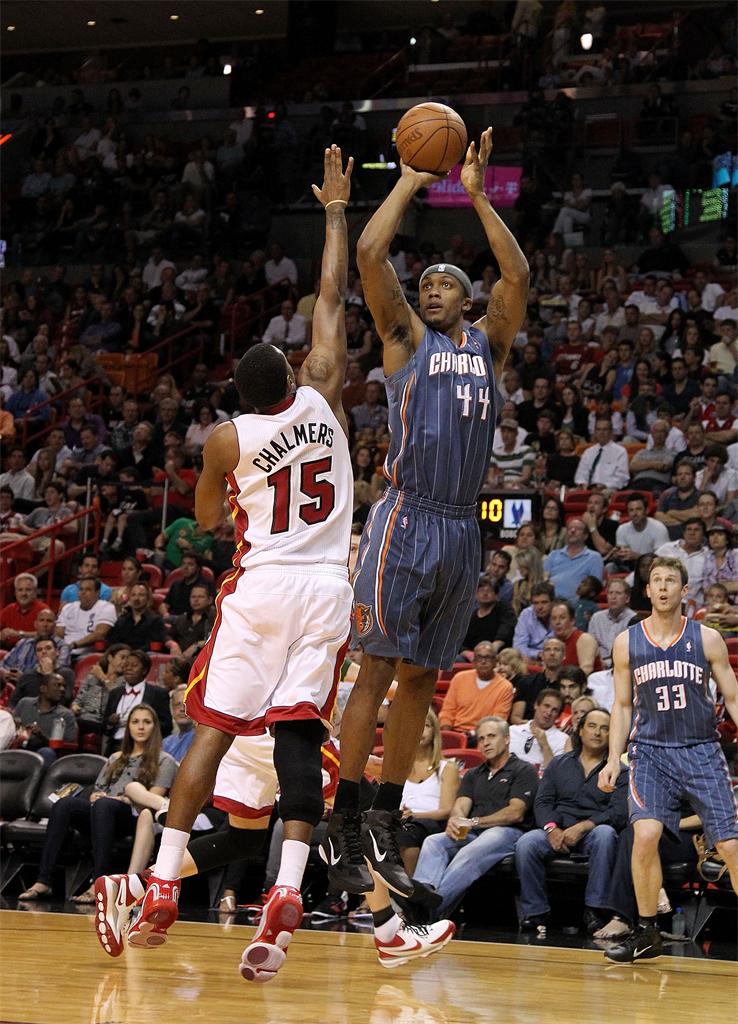 Land of 10,000 Lakes-Bound? ... Drinking With Wolves, a Minnesota Timberwolves blog, speculates that Dante Cunningham may be on the trading block as the Memphis Grizzlies are interested in Minnesota guard Wayne Ellington. Speculating that the Grizzlies might be willing to give up Cunningham in return, they write, "Cunningham is most notably known for dunking over the Poster Child, in Blake Griffin this past post season. He averaged only 1.1 points per game in the playoffs, but 5.2 points per game through 64 games during the regular season. Defense has always been a problem for the Timberwolves, and Cunningham would add that length and versatility down low and be a force on the glass alongside Kevin Love."