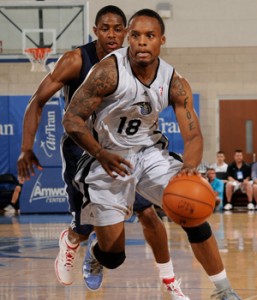 Maalik Wayns excelled excelled for the Orlando Magic summer league team. When he left Orlando to head to Las Vegas to play for the Golden State Warriors in the other NBA summer league, there were high expectations for him. Then something curious happened.

Not just in the first game, but in all of the Las Vegas games. He was listed on the Warriors roster, but consistently recorded no minutes and no statistics in each game. Apparently the reason he sat was two-fold, by playing with Orlando, he missed all or part of the Warriors training camp, and then after appearing in just a scrimmage against Phoenix on Monday, he "tweaked his groin" and had to sit out with the injury.

The San Francisco Chronicle reported that he could have been in line for a contract bigger than what most second-round picks sign for in the NBA.

Then, he left. He packed up his things today and left the Warriors summer league team to return home. There was no official reason given why that happened. If he had secured and accepted a contract or a guaranteed camp invite, however, he may have had to leave the team for that reason.

One rumor floating around, however, has Wayns heading overseas after signing or agreeing to terms with a European club. Similar to the move made by Scottie Reynolds, when he passed on an offer to go to the Phoenix Suns training camp in favor of a contract in Italy's second-division.