Austin back in play?

Share All sharing options for: Austin back in play? 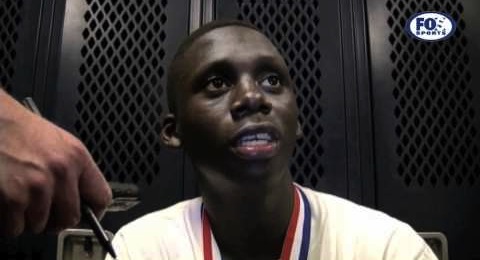 The NCAA plans to throw some heavy penalties at Penn State in the morning, but according to Dave Telep, that had no bearing on 6-6 point forward Brandon Austin, who de-committed from the Nittany Lions basketball program this past week. The Philadelphia native has not commented on his decision to about-face on his plans to attend the state university, but may do so later in this week.

According to ESPN, Villanova had offered Austin prior to him committing to Penn State, though it isn't known if the Wildcats will be involved with him again, now that he's available again. According to CoBL, a long list of schools including Georgetown, Kentucky, Ohio State, Syracuse, UCLA, Florida and Baylor have expressed an interest to Austin's coaches at Team Philly (AAU) and Imhotep Charter.

He helped Imhotep Charter to win a state championship last season and will be expected to have a strong senior year.

He is rated 4-stars by recruiting services, noted for his "good handle and killer crossover." Despite being classified as a small forward, his passing skills are strong enough that teams can run their offense through him as well. He is a great slasher and penetrator and projects to be a good scorer at the college level, but is still developing his jump shot (but it is developing, being described as "more than serviceable").

Austin would seem to fit well with Villanova's scheme, but it isn't entirely clear if Villanova remains interested in the local product as they search for the program's first 2013 commitment.