Share All sharing options for: Foye heads to Utah 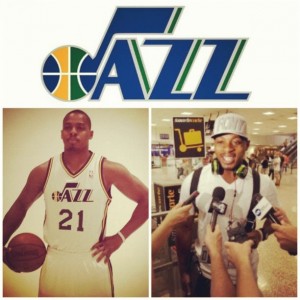 Randy Foye flirted with a return to the east coast, with interest from the Knicks and Hawks and was receiving interest from the Mavericks, Rockets,Suns, Bucks and Bulls early in the free-agency process. None of those teams were ultimately able to grab the 6-year veteran, however, and Foye will head back to the Western Conference for the 2012-13 season — with the Utah Jazz.

According to ESPN, Foye agreed to a one year deal with the Jazz on Monday night. The deal is reportedly worth $2.4 million, which will allow him to be added to Utah's roster under their mid-level exemption.

He was considered one of the last "quality shooting guards" available in free agency this offseason. He averages 11.6 ppg for his career, shooting 41.1% from the field and 36% from deep, but broke out in the second half of last season.

He started the 2011-12 campaign coming off of the Clippers' bench, but after Chauncey Billups suffered a season-ending injury, he stepped into a starting role for Lob City. He averaged 12.8 points as a starter and connected on 40% of his 3-point attempts after taking on an increased role.

The Jazz, and most of the league, are hoping that Foye can continue that shooting productivity next season. Utah was 27th in the league in three-point percentage last season, and will need to become more efficient. He will compete with former Butler star Gordon Hayward, Alec Burkes and rookie Kevin Murphy for playing time.

The Jazz will be the fourth team for the former Villanova star and 2006 NBA Draft Lottery pick. He previously spent three years with Minnesota, one in Washington D.C. and the last two seasons with the Los Angeles Clippers. Foye has impressed in spurts when he has started, but hasn't always been given the opportunity to take on a major role.

Fisher getting interest from Belgrade

According to Sportske.net, Corey Fisher — who was most recently seen playing with the Minnesota Timberwolves in the NBA Las Vegas summer league — is a target for the Serbian champions, Partizan Belgrade.

Loosely translated by Google, they wrote:

another dark-skinned American is the target of Serbian champions. It is Korija Gaius Anthony Fischer, who plays a combo guard, which means that can equally well to the game play and the position of shooting guard.

Last season for Turkish cellar-dwellers Antalya, Fisher averaged 17.2 points, 3.5 rebounds and 4.4 assists. In Las Vegas, Fisher averaged 6.4 points, 1.4 rebounds and 1.6 assists for the Timberwolves. His performance seemed to improve as the summer league went along, scoring 12 points, shooting 50% overall and 66% from beyond the arch on on July 22.

Corey Fisher tweeted this morning that he has not signed with Partizan. He also retweeted a fan's, "welcome to Partizan" message.

Randy Foye's foundation, benefiting young men and women in Newark with education, mentoring and other opportunities for personal and academic growth, is again participating in the "Tickets Fore Charity" program this summer. If you are interested in attending local Professional golf events like the Barclays in New York or the the World Golf Championships Bridgestone Invitational in Ohio, you can buy your tickets through this program and 75% of the purchase will go directly to the Foye Foundation's programs.

Do you like golf? You can support the Randy Foye Foundation by attending PGA Tour events in New York and Ohio! RFF participates in the PGA Tour's Tickets FORE Charity Program, which means that you can buy tickets and have 75% of your purchase go to RFF! Visit http://www.buytfc.com/ to purchase your tickets for the World Golf Championships Bridgestone Invitational in Akron, OH from August 1-5, or The Barclays in Farmingdale, NY from August 21-26. Be sure to use RFF's unique checkout codes - CART for Bridgestone Invitational and TEETIME for The Barclays!