Share All sharing options for: Should Penn State come to PPL Park? 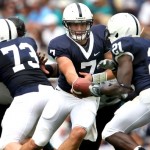 The NCAA hammer has eliminated every win by Penn State football from 1998 through 2011, banned them from the postseason for 4 years, cost the school $60million and, notably, reduced their overall scholarships to 65 -- just two more than FCS schools are capped at. Essentially, for four years of their five-year probation, the Nittany Lions will be an FCS program playing in the Big Ten.

PSU head coach Bill O'Brien may want to give Andy Talley (now the longest-tenured coach in the state) a call to ask him how to deal with such a huge scholarship deficit. Villanova plays at least one FBS school every year, having to deal with having 22 fewer scholarship athletes than their opponent. That fact always makes it a tough game, even when they have matched up with some down-on-their-luck FBS schools. Now, Penn State will play 48 of those games over four years.

While the state university may still balk at the proposal, this would be an excellent opportunity for Villanova football to schedule them. It may be the most even playing field that the Wildcats would ever see against the Nits -- especially with many of their talented players expected to transfer now. 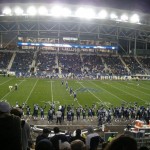 In fact, with Penn State appearing to be rather down on their luck, perhaps it is worth offering to host them at PPL Park?

The last FBS program to play at Villanova was Wake Forest in 1988. Wake had a new head coach and was trying to build up from some hard-luck years with Al Groh at the helm earlier in the decade. The Wildcats offered an opportunity to the Demon Deacons back then and despite having to travel to diminutive Villanova Stadium, they accepted.

Penn State, potentially adopting pariah status in the college sports world may also benefit from that sort of an arrangement. In fact, now Villanova can offer a better venue than the stadium -- PPL Park, a beautiful waterfront stadium that would be easily filled to standing room for such a game.

Are we dreaming? Probably. Nonetheless, phone calls are cheap and Vince Nicastro makes a lot of them already. What's one more?

The hammer has been dropped on the big bad Nittany Lions, and the healing process is just beginning. If Villanova can help Penn State through that process, they should, and endear themselves to the residents of Pennsylvania in the process.