Share All sharing options for: Dante moves to Minny 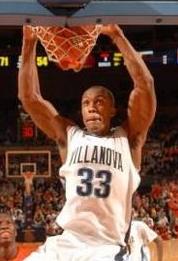 Villanova alumnus Dante Cunningham will wear his fourth different NBA uniform when the 2012-13 season starts. He was traded by the Memphis Grizzlies to Minnesota for former UNC guard Wayne Ellington in a trade that was finalized on Wednesday. From the Wolves point of view, Cunningham offered them flexibility, playing both forward spots, and an active defender who could be useful to them this season. Ellington -- a former first round pick -- was likely to spend most of the season riding the pine, however.

In terms of salary, Cunningham was earning approximately the same amount as Ellington after signing with the Grizzlies last summer as a restricted free agent. Cunningham was picked in the second round of the 2009 draft, five spots below Ellington.

The Timberwolves needed frontcourt help after losing Michael Beasley and Anthony Randolph, and they still seem likely to be without Anthony Tolliver next season as well.

Dante was originally drafted by the Portland Trailblazers and played there until being traded to Charlotte during the 2010-11 season. He has one year left on his current contract at approximately $2 million.

The Timberwolves were also part of negotiations that could bring them Andrei Kirilenko from the Utah Jazz. Should they acquire Kirilenko, they could look to move Cunningham to another team.

The Utah Jazz are now officially announcing the signing of Randy Foye. Their deal with the former Villanova combo-guard was reported earlier in the week, but now the team has issued a release on the signing. Pending a satisfactory physical, Foye will join Utah for the upcoming NBA campaign.